By Sotheby's
Discover more about enigmatic artist, designer, architect and performer Flávio de Carvalho whose work is on show at S|2 London from 12 April–24 May.

1. This is the very first time Carvalho’s works have been exhibited in the UK, despite his having been educated in England. Though he is recognised for his artistic contribution in Brazil, he is largely unknown outside of his home country. Carvalho began his studies in the UK at Clapham College in London and then attended Durham University to study Civil Engineering and Fine Arts in 1918. Carvalho absorbed many of the movements pervading Western Europe at the time, including the work of the German Bauhaus and the writings of Sigmund Freud, who’s theory of psychoanalysis became highly influential in Brazil.

2. Flávio de Carvalho was one of the most influential figures of the Brazilian modernist movement, and was said to be a "romantic revolutionary" by Le Corbusier himself. This movement shifted and created a new ideology for artists and thinkers to follow; The Anthropophagy Manifesto, which exhibited themes of ant-colonialism, and Brazilian nationalism. The idea was to ‘cannibalize’ other cultures, specifically European Modernism, by incorporating them, and re-appropriating them, and finally regurgitating them as an entirely new and unique creations.

3. He was an artist of many talents and did not fit into any category. Carvalho was a veritable polymath, whose practice ranged from drawing and painting, to designing furniture and renowned architectural projects, he was also involved in theatre and fashion, to finally what he is best remembered for – his performance art. His interest in human behaviour, especially the reactions of people, were truly tried and tested through his provocative performances. It could be said that through Carvalho’s performances he envisioned humanity liberated from religious taboos, while breaking down conventions and irreverent forms of expressions to shock the bourgeoisie in Brazil at the time.

4. Carvalho frequently courted controversy, most famously in 1931 when he carried out his debut performance; Experience No. 2 which was arguably the first performance art to be seen and recorded in Brazil. The performance involved the artist walking against a Corpus Christi procession in downtown São Paulo and almost being lynched due to his provocative attire – wearing a hat that was perceived as offensive in this highly religious setting. He had called on the media, to ensure he was photographed and documented, which also makes him one of the first artists to mobilize mass media. He later documented the event himself, publishing a book recounting and commenting on the psychology of the event.

5. In 1933, he founded the Modern Artists' Club, which greatly stimulated the cultural life of São Paulo. He took part in the creation of a discussion space on different areas, bringing together artists, composers, writers and psychiatrists, which added to his already renowned status for being an avid thinker, and an influential pioneer to the future of Brazilian modernism.

6. Carvalho also took over the artistic direction of the May Salons in 1939, which were a series of self-organised group exhibitions promoting modern art trends initiated by artist and critic Quirino da Silva. Carvalho’s involvement in the Salons led to the participation of British surrealist and abstractionist artists such as Ben Nicholson, Roland Penrose, Ceri Richards and Eric Smith.

7. Many of his exhibitions and performances were censored by the police. Most importantly, in 1934, his first solo exhibition was entirely suspended, with five canvases confiscated by the police for obscenity. The following day, to protest this interdiction, he wrapped up all the statues of São Paulo with white camisoles. The artist successfully sued in court for the right to reopen the exhibition, and he soon became known as an avant-garde intellectual provocateur. One of Carvalho’s portraits from this exhibition is included in the current show at S2 – Portrait of Architect and Painter Carlos Prado, 1933. 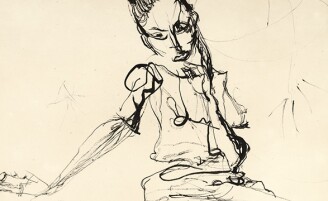