7 Elegant Watches for Work and Play

Jaeger-LeCoultre’s iconic Reverso design has been reimagined in countless ways, not only as wristwatches, but also pendant and pocket watches. The present example in white gold is highly complicated and lavishly decorated with a mother of pearl motif and dial, adorned with baguette-cut rubies and both round and baguette-cut diamonds. Complemented by its white gold and ruby-set chain, this rare watch is an excellent example of the evolution of the 'Reverso' model.

The Reference 5040 was produced from 1992 to 2007 and was one of the firm's most exceptional timepieces, combining the highly desired and iconic perpetual calendar with an exciting tonneau form case.

The present example is one of only six Ref. 570 watches in stainless steel with Breguet numerals and a stunning three-tone dial. The design of the dial is divided into four parts: the minute track at the edge of the dial is set in one silvered tone matching that of the dial's center. Next, the chapter ring is satin silver finished. Finally, a mirrored ring divides the center of the dial from the chapter ring.

Richard Mille's RM008 is arguably the magnum opus of their entire collection, and to this day, one of the most complicated objects ever made. Inspired by Formula 1 racing and composed of over 500 parts, the split second chronograph function is extremely desirable among racing aficionados, as it enables the wearer to simultaneously time two distinct events.

The Rolex Paul Newman Daytona needs no introduction, with its highly distinct and attractive square markers on the subsidiary dial. The Ref. 6241 was produced from the 1966 until 1969, with a slightly wider metal bezel and acrylic insert. Less than 3,000 reference 6241 wristwatches were made, and only a small fraction of them were made with a ‘Paul Newman’ dial.

Audemars Piguet celebrated the 30th anniversary of their most iconic wristwatch with the Royal Oak Concept Watch 1 (CW1), presented at the 2002 SIHH convention. The present lot is a cutting-edge example of firm's commitment to both traditional and innovative technological research.

Cartier’s classic design was aptly named after Brazilian aviation enthusiast, Alberto Santos Dumont. The Cartier Santos was the first ever men’s pilot wristwatch created by Louis Cartier for easy legibility of time whilst in the air. The design is now iconic, and the present lot is elevated in platinum. 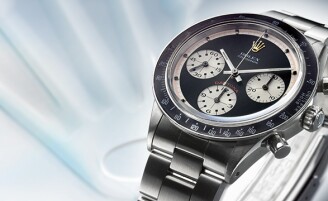