An Insight into 19th Century Neuroscience with Véber's 'Man with Dolls'

T his strange and spectacular composition shows in the foreground a young and beautiful woman, lying on a bed, naked. On the left, a man in black – thin, pale and prematurely aged – looks passionately at a doll he holds tightly in his hands. Around them, a multitude of dolls are hanging on the wall, lying on the floor, on the bed or on the man's knees.

Véber insists on the contrast between the young, fresh and luminous body of the woman and the dark figure of the man, whose attitude and expression reveal he lives in an imaginary world, crowded with dolls. He does not look at the woman but at her substitute, the object of all his desires and dreams. Véber approaches here a subject that was rather daring at that time, showing a man who seems to reject authorized sexuality and prefer a different and deviant one.

Véber was certainly aware of contemporary research by neurologists, Freud above all, on hysteria, neurosis and obsessions. Freud's major discoveries were beginning to change the public's perception on mental illness. A man with an obsession was of interest to Véber, himself a tormented man. Interestingly, the painter and the male subject of this painting bear similarities, both being thin, pale and anxious.

Madness and insanity were frequent subjects in 19th century art and literature: In the 1820s, Géricault painted an extraordinary series of 'Monomaniacs'; Delacroix painted, among others, Le Tasse dans la maison des fous and La folie d'Ophélie; François Auguste Biard showed l'Intérieur d'une maison de fous. Charles-Louis Muller and Tony Robert-Fleury depicted the alienist François Pinel freeing 1790s men and women locked up for mental troubles from their chains. At the end of the century, Symbolist artists tried to express their deepest emotions and dreams, often strange and fantastic, sometimes close to madness. In representing a man living in an imaginary world and rejecting reality, Véber is close to the Symbolist ideas.

In the picture, some dolls seem to have a symbolic meaning, which could possibly help to discover the cause of the man's 'monomania' and also to find out more about Veber's psyche. What does the doll crowned with laurel symbolize? Victory, Genius, Immortality? Why has she surrounded the man's neck with a golden thread? On the ground a Virgin Mary obviously symbolizes Religion. Hanging on the wall is Athena, Goddess of War but also of Wisdom and Reason. Next to her we can see Death and a doll which could be a judge. Are they all waiting for the man – a modern Pygmalion – to take them in his hands and bring them to life?

Man with Dolls was exhibited at the Paris salon in 1896. It was the direct inspiration for Jean-Louis Renaud's novel L'homme aux poupées, published by Floury in 1899 and illustrated with 18 drawings by Véber. A hymn to imagination, phantasm and fetishism, the novel tells the story of a man obsessed with dolls. At the end of the novel, the woman who loves him, decides to play the part of a mechanical doll (reminding us of Olympia in Offenbach's Contes d'Hoffmann) as it is the only way the man will notice her and love her. In 1903, the novel inspired a pantomime by Henri Bérény and in 1909, it was adapted into a movie, L'homme aux poupées. 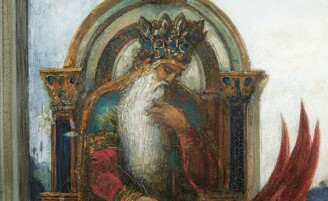