By Forest Casey
With a selection of convertibles, sport coupes and even a Special Race Boat available for bidding, RM Sotheby’s offers every form of transportation one could want – all in time for summer. 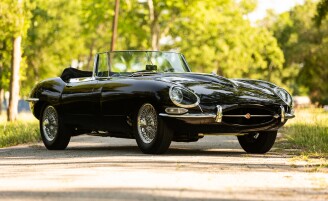 Kicking off this list of sporting summertime options is this 1991 Acura NSX, a late 20th-century classic presented in original condition. With a wedge-shaped design that still appears contemporary today, it’s difficult to believe this example is nearly three decades old. Inside, the expansive windshield offers exceptional forward visibility, as well as a front-mounted spare tire and generous rear luggage compartment for long trips. Showing only minor stone chips on its original paint, its odometer reading under 55,000 original miles, this NSX still has sufficient performance to keep up with modern offerings.

Lowering the folding fabric top on this 2008 Aston Martin Vantage Convertible makes the 4.3-liter V-8 engine that much more sonorous, perfect for a summertime cruise. The color combination of Titanium Silver over Chancellor Red leather is classic for the British brand, whose first car, a 2.0-litre Sports roadster, debuted exactly six decades prior at the 1948 London Motor Show. While the original Aston Martin roadster had to make do with a modest 93 horsepower, this Vantage produced nearly four times that figure from the factory, though the Vantage is aided by four extra cylinders and nearly double the displacement of its ancestor. Showing fewer than 14,000 miles from new, this well-preserved example presents a prime point of entry to the world of modern British motoring.

If your tastes in British roadsters tend towards earlier examples, look no further than this 1967 Austin-Healey 3000 Mk III BJ8, the last of the “Big Healeys.” Painted the perfect shade of British Racing Green over practical black leather interior, this particular model was exported to the United States on 19 June 1967. As Austin-Healey refined their signature roadster continuously, the relatively late build date on this example is preferred by many enthusiasts for its combination of luxurious appointments and performance upgrades. The interior and dashboard were significantly refined for the 1967 model – this example was fitted with rear seats and a luggage rack for road trips. This lot is accompanied by a BMIHT certification of authenticity, the most important accessory for any British roadster.

Like the previous lot, this 2002 BMW M Coupe was assembled late in production and thus benefits from the advancements of the previous variants, which essentially date back to the BMW Z3 and its underlying E36/7 chassis. Critics who derided the Z3’s four-cylinder engine and roadster-spec body flexibility were silenced by the M Coupe, which BMW engineered to be 2.6 times more rigid than its open-top counterpart. Perhaps the most significant development for the M Coupe came in terms of the S54 engine, shared with the E46 M3, which was fitted in the final two years of the model run. Between 2001 and 2002, a total of only 678 BMW M Coupes were equipped with this 315-horsepower, inline six-cylinder engine. Complete with a power sunroof and wearing a rare color combination of Steel Grey Metallic over Imola Red and Black Nappa leather – one of only two built to the same specification in 2002. With an odometer showing under 26,500 miles from new, this BMW M Coupe offers the ultimate driving experience just in time for summer.

While the M Coupe has recently experienced a re-appreciation among casual BMW fans, the M3 has enjoyed near-universal appeal since its debut in 1986. This 1990 example has recently been treated to a $5,500 cosmetic restoration and a $5,600 mechanical service, including a conversion to a modern R34 Air Conditioning system, ideal for warm days at the track. Lightweight Sparco racing bucket seats with five-point racing harnesses, a full roll cage, and an Alcantara-wrapped steering wheel complete the track-focused setup.

Not every car needs to be a track-day special to be sporting. This well-kept 2009 Bentley Continental GTC is a sublime statement car for quick trips into town and long cruises along the coasts alike. Showing under 18,000 miles and serviced faithfully, this open-top British grand tourer is only two owners from new. Deploying the optional cockpit air deflector creates an uncanny experience, seemingly quieting the outdoor environment itself by reducing recirculating air inside the cabin and streamlining the Continental’s aerodynamic profile. The 6.0-liter twin-turbo engine and a fresh set of Pirelli P-Zero Nero tires help expand the Continental’s sporting credentials even further.

There are many who argue that if you desire the most adept summertime cruiser, what you really want is a boat. Within that argument, there is a subset who strongly insist that ship design was essentially perfected in the 1930s, where teardrop Art Deco shapes inspired boats that are equally beautiful in or out of the water. This 1937 Chris-Craft Special Race Boat looks almost like a coachbuilt Packard built to float, complete with a mother-of-pearl dashboard and ‘Banjo’-style steering wheel. Wearing its original colors of Yale Blue and white with matching king planks, this 19’ race boat was one of only 49 total Racing Runabouts of the same length built by Chris-Craft from 1935 to 1938. With seating for five (including two in the rear fold-out jumpseat), the only thing missing from this lot for the perfect summertime excursion is a period pickup truck with which to tow it…

By sheer coincidence, this two-tone truck happens to match the Chris-Craft’s color scheme. Thanks to a recent “wheels-up” restoration and customization, this 1948 GMC Pickup resto-mod packs sufficient thrust to tow (nearly) any boat. A brand-new Chevrolet Performance V-8 crate motor built with Edelbrock intake manifold and air cleaner powers the Pickup, while the attached Valley V5 welded steel receiver is rated to haul loads from 5,000 to 6,000. Tastefully integrated digital stereo and A/C systems increase the Pickup’s interior comforts, while a locking Lund stainless steel toolbox and refinished wood-and-chrome bed provides ample space for anything else you wish to take with you.

This six-speed sports car seems designed purely for summertime enjoyment, with its classic Ferrari gated manual transmission controlling a 3.5L DOHC V-8 engine mounted between the wheels for optimal balance. This 1995 Ferrari F355 Spider wears a Giallo Modena paint scheme over a Nero leather interior with a matching folding fabric top. The F355 was the first Ferrari to feature a powered folding top, and this example shows little wear with its rear window clear from haze. With under 31,000 miles since new and receipts showing recent service accompanying the car, this Ferrari Spider strikes the perfect balance between fun driver and investment-grade supercar.

Echoing the iconic “Rent-A-Racer” campaign from the 1960s between Ford, Shelby, and the Hertz Corporation, this 2007 Ford Shelby GT-H Convertible was available as part of the firm’s “Fun Collection,” and spent one year of service as a rental car in Phoenix, Arizona. Number 007 of only 500 made, this limited-edition convertible was sold into private ownership and now shows fewer than 21,500 miles since new. With the addition of nearly every performance upgrade available, along with a history of careful maintenance while in private ownership, this “Rent-A-Racer” is one worth keeping.

Manufactured on 27 May 1952, this low-slung British roadster was built for the U.S. market and originally dispatched to Los Angeles, California. While the Jaguar Heritage Trust paperwork accompanying the car indicates the original color combination was an especially extroverted Pastel Blue with Red interior trim, a darker shade of blue was chosen sometime in the roadster’s history. The current owner focused on performance upgrades, with a major service in 2011 from Jon Pollock Restorations, including the addition of twin HD8 S.U. Carburetors with machined intake manifold and a Wilwood front disc brake conversion, and a Tremec five-speed gearbox, making it the ideal companion for vintage rally events. The most recent service receipts date to January 2020, including new gaskets on the oil pan, gas tank, and valve cover, and total over $4,000. Freshly serviced, ready to enjoy.

The earliest Jaguar Series 1 E-Type coupes and roadsters featured ‘flat floors,’ one element of three configurations that have become most sought-after by collectors (the other two being ‘welded louvers’ and ‘outside bonnet latches’). The difference in values in E-Types with one of these features as opposed to all three is significant – this roadster has all the aesthetic beauty of a Series 1 E-Type with an estimated value about half the price of the earliest serial numbers. Proudly wearing a Marine Corps badge in honor of its first owner, a veteran of the Korean War, this E-Type was well-bought and faithfully kept – now it is ready for its next caretaker.

Styled by Piero Frua, the lithe Mistral was the first in a series of great Maserati sports cars named for fearsome winds, which went on to include the Ghibli, Bora, Shamal, and Khamsin, among others. The Mistral was also the last of its kind, at least in terms of its engine. Equipped with the largest-displacement version of the twin-spark, six-cylinder Maserati engine that could trace its way back to the motor that powered Juan Manuel Fangio’s Tipo 250F to Grand Prix victory, the Mistral was offered in both steel and aluminum (or ‘alloy’) bodies beginning in 1967. Offered in its original Rossa Cordoba paint with black Connolly leather interior, this sporting Maserati is one of only 828 built. Though it is currently in non-running condition, this Mistral presents an appealing project to those who willing to restore the luster to a mid-century Maserati classic.

Sold new to a U.S. Army serviceman while stationed in France, this lovely Porsche 356 Cabriolet appears in its original color scheme of Irish Green over a Fawn leather interior. Originally optioned with a chrome luggage rack and the desirable Blaupunkt Frankfurt radio upgrade featuring loudspeakers and an antenna, this 356 is a “C” model, indicating it is from the final of three generations. Though the original SC-spec engine suffered damage, it was replaced with a Super 90 engine of equal displacement paired with the original transmission. For those with an eye for restoration, the original powerplant accompanies the car.

The last on our list of affordable options follows the trend of the previous entries – choose a car that may have been unloved upon its release and find the most evolved version. This 1976 Porsche 914 2.0 is from the final year of production and serves as a reminder that the biggest is not always best. Of all 914 variants, the 914/6 has typically been the one favored by Porsche collectors, though with 99 horsepower and 118 pound-feet of torque, the 2.0 four-cylinder model from 1976 provided equivalent motive force as its six-cylinder predecessor. And a total production totaling under 4,099, it was nearly as rare. This example enjoyed single ownership for most of its life courtesy of marque enthusiast Robert Avery. With an odometer showing under 33,900 miles, this pristine Porsche would be equally adept at a blast up a canyon road as it would be presented at a summer Concours.