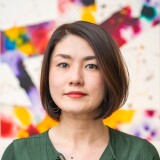 Yuki Terase was appointed Head of Contemporary Art, Asia in January 2018. Based in Hong Kong, she leads Sotheby’s auction and private sales of Asian and Western contemporary art in Asia.

Since joining Sotheby’s in 2011, Ms. Terase has been instrumental in introducing Japanese contemporary art to Asia and around the world, cementing Sotheby’s position as a category leader. She has also spearheaded many white-glove sales with an innovative curatorial approach exemplified by the phenomenal success of the dual sales with street fashion master NIGO®, as well as of #TTTOP in October 2016 which marked the first-time offering of Western contemporary art in the region during the main auction season.

Under the guidance of Ms. Terase, Sotheby’s Japanese clients have emerged as a significant presence on the global auction market, best illustrated in the New York sale of Jean-Michel Basquiat’s Untitled in May 2017, which sold to Japanese collector Yusaku Maezawa for a record-breaking price of US$110.5 million.

In 2019, Ms. Terase has achieved the biggest contemporary art sales turnover total of any auction house in Asia after achieving a number of important artist records for such as Yayoi Kusama, Yoshitomo Nara, Liu Ye, as well as Western blue-chip artists such as KAWS and Julie Mehretu in the Hong Kong auctions. In 2020, she was responsible for placing the most expensive Western artwork ever to be sold in Asia: Gerhard Richter’s Abstraktes Bild (649-2) at HK$214.6 million (US$27.6 million) to the Pola Museum of Art, Hakone, Japan.

Before joining Sotheby’s, Ms. Terase worked for Morgan Stanley as a member of its Mergers and Acquisition advisory team in Tokyo.