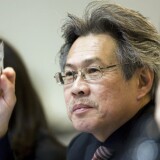 Sotheby’s became the first international auction house with a representative in Malaysia when the firm appointed Mr Cheah to the post in 1994. That year, Sotheby’s Malaysia held its first Jewellery preview and has held an average of two previews a year ever since. In January 1998, Mr Cheah was promoted to Managing Director when Sotheby's Hong Kong officially established a branch office in Kuala Lumpur, Malaysia.