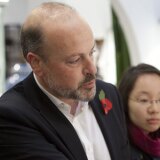 Mr Loakes began his career at Phillips International Auctioneers in 1997 and prior to joining Sotheby’s he spent five years at Bonhams, London, as a Chinese art specialist. His areas of interest include early blue-and-white ceramics and imperial works of art, which are reflected in his recent discoveries and successful multi-million pound sales of a magnificent Yuan jar (2010), and two imperial jade seals of the Qing dynasty (2009 and 2011). He was part of the team that handled the important sales of the Carl Kempe Collection (2008) and the Mu Fei Collection (2007).

Mr Loakes holds a First Class Honours degree in Fine Art Valuation from Southampton and spent a year studying at the Beijing Language and Culture University and travelling extensively through China in 1998.