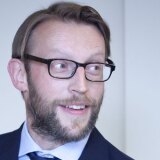 Simon Hucker joined Sotheby’s in 2012 after 14 years of working in the London art world, the last 8 of which as a director of one of the capital’s leading galleries of Modern and Post-War British Art. Here he looked after the estates and studios of some of the 20th century’s most important British painters and sculptors, including Ivon Hitchens, Roger Hilton, Kenneth Armitage and Eduardo Paolozzi.

At Sotheby’s Simon has been deeply involved in a number of highly successful single-owner sales, including ‘Bowie/Collector’ (the personal collection of the late David Bowie) in 2016; ‘A Painter’s Paradise: Julian Trevelyan & Mary Fedden at Durham Wharf’ in 2015; ‘ABSTRACTION – Post-War Painting from the David Thomson Collection’ in 2014 and the highly successful sale of contents from The Ivy Restaurant in March 2015, sold to raise funds for Child Bereavement UK. In 2013 Simon co-curated the selling exhibition ‘The New Situation – Art in London in the Sixties’ alongside legendary dealer Kasmin.

Simon holds both Bachelor and Masters degrees from the Courtauld Institute of Art, London, where he studied Post-War American Art, German Expressionism, as well as Ancient Greek, Roman and Byzantine Art. He developed his interest in Modern British paintings whilst cataloguing the Garman Ryan Collection in Walsall. He also worked at the Barber Institute, and at the Peggy Guggenheim Collection in Venice, and has published many texts on 20th Century British art including George Kennethson, A Modernist Rediscovered, published by Merrell.