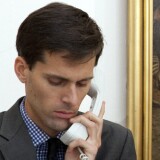 Serving as a Specialist in 19th Century European Art since 2004, he has catalogued each of the biannual sales, working closely with the world’s preeminent art scholars. In the process, he has rediscovered a number of masterworks from the period, including Jehan-Georges Vibert’s Gulliver and the Lilliuptians, which achieved $1.5 million—the auction record for the artist. Mr Armitage advises key private American collectors seeking works from significant 19th century European artists such as William Bouguereau, Emile Munier, Leon Jean Basile Perrault and Arthur John Elsley.

He received a Bachelor of Arts degree in Art History from Vassar College and a Master of Arts degree with a concentration in Late 19th Century Art from the University of Chicago.