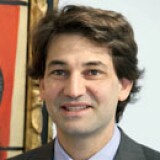 Samuel Valette, Senior Specialist, Impressionist & Modern Art Department, Sotheby's London, joined Sotheby's in 2003. He actively assists collectors and dealers throughout Europe in buying and selling their works on the international market. Sam has played an important role in bringing major works and collections to the market, including Monet's Nymphéas, sold in June 2007 in London for £18.5 million; works from the Durand-Ruel collection, which achieved $16 million in New York in November 2009; and the world record for a work by André Derain, when Arbres à Collioure from the renowned Vollard collection achieved £16.3 million in London in June 2010. Prior to joining Sotheby's Mr Valette was a director of Galerie d'Orsay, an art dealing partnership specialising in 19th- and early 20th-century art. He plays an active role in the organisation of Sotheby's Impressionist & Modern Art sales in London, Paris and New York.