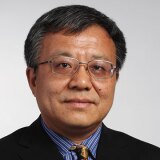 Rongde Zhang joined Sotheby’s in May 2013. Based in New York, he is responsible for the collection, authentication and appraisal of paintings and calligraphic works for sale. Sotheby’s launched Classical Chinese Paintings sales in Hong Kong in October 2015, adding to its existing selling location for the category in New York. Following this strategic move, Sotheby's holds bi-annual auctions in both locations and presents collectors with works by renowned Chinese painters from the 14th to 19th centuries.

Under Rongde Zhang’s leadership, Sotheby’s has firmly established the company as a leader in the Classical Chinese Paintings market. In 2014, Sotheby’s annual sales of Classical Chinese Paintings in New York exceeded US$51.3 million. In March 2015, a Ming Dynasty collection of Buddhist sutras from an important Japanese collection was sold for US$14 million, nearly 100 times its pre-sale high estimate. Classical Chinese paintings sales in New York in 2016, which included the landmark sale of the Collection of Roy and Marilyn Papp, realized in excess of $60M.

Rongde Zhang brings to Sotheby’s decades of experience in the field of Classical Chinese Paintings and an extensive network of clients in both Asia and the US.  Prior to joining Sotheby’s, he held management roles in two China-based auction houses. He also studied and worked in Japan for over ten years, during which he established strong connections with the local collecting community.