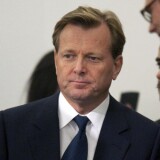 Robin Woodhead is Chairman of Sotheby’s International. He joined Sotheby’s in 1998 and was elected to the Board of Sotheby’s Holdings in February 2000.

Mr Woodhead is a Governor of the South Bank Centre, which includes the Hayward Gallery and the Royal Festival Hall, and is the Chairman of the Hofesh Shechter Company, a contemporary dance company. He has previously served as Treasurer of the Contemporary Art Society, was Chairman of the Ballet Rambert and Chairman of the Music Research Institute.

Prior to joining Sotheby’s, he was formerly the Chairman and Chief Executive of the National Investment Group, a private investment banking group, founding Chairman of the International Petroleum Exchange, and Chairman of the Trainee Lawyers Association of England and Wales.

His experience in the arts includes more than five years as a Director of the Whitechapel Art Gallery Foundation, a public gallery that showcased the works of contemporary artists.

Mr Woodhead was born in Ireland and educated in Rhodesia. He received a law degree from London University.