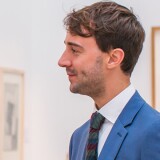 Robin Cawdron-Stewart joined Sotheby’s in 2012 from another leading auction house and leads the twice-yearly Made In Britain auctions as Head of Sale. Celebrating the interdisciplinary nature of British Arts and Crafts over the past century across the fields of Fine Art, Prints, Photographs and Design, the sale also reintroduced the field of Contemporary & Studio Ceramics to Sotheby’s, going to achieve consistently strong results for ceramicists including Dame Lucie Rie, Hans Coper, Bernard Leach, James Tower, Magdalene Odundo and Gabriele Koch. At Sotheby’s Robin has played a pivotal role in landmark sales and selling exhibitions including ‘1000 Ways of Seeing: The Private Collection of the Late Stanley J. Seeger’ in 2014; ‘Daughter of History: Mary Soames and the Legacy of Churchill’ in 2014; ‘A Painter’s Paradise: Julian Trevelyan & Mary Fedden at Durham Wharf’ in 2015; ‘Bowie/Collector’ in 2016 and ‘Howard Hodgkin: Portrait of the Artist’ in 2017.

Robin graduated with an MA in History with History of Art from the University of Edinburgh, and has written for institutions, galleries and publications including The Royal Academy, House & Garden, Ceramic Review and Gallery LVS. Robin also serves as an auctioneer.