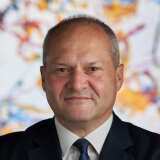 Robert Sleigh is the Managing Director of Business Operations based in Sotheby’s Hong Kong offices, responsible for Post-sale and Pre-sale administration, Operations and Logistics as well as Client Strategy, Communications and Marketing.

Prior to moving to Asia, Robert was based in New York, where he was Head of Sotheby’s New York Wine Department. He is also an auctioneer for Sotheby’s Hong Kong auctions in as well as multiple charity auctions throughout Asia. Auctioneering highlights include the most expensive wine lot ever sold - the 114 bottle Romanée-Conti Superlot, US$ 1.6 million (HK$ 12.6M) in 2014. Outside Sotheby’s he provides auctioneering services for organisations such as Room to Read for their Tokyo and Singapore galas, Mother’s Choice annual Truffle Auction and The Hong Kong Jockey Club’s bi-annual yearling racehorse auctions.