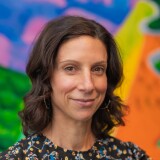 Nina del Rio joined Sotheby’s in 1988 and has been in her current position since 2003. Under her direction, Sotheby’s has been privileged to offer the majority of American institutional collections that have come to market.

Ms del Rio began her career with Sotheby's as a Cataloguer in the Prints department. After a brief hiatus working at the Marlborough Gallery publishing prints, she returned to Sotheby's in 1995 to become Director of the Contemporary Prints department. In 1999, she began working on the launch of Sotheby’s online auction site and managed different aspects of Sothebys.com until moving to Museum Services.