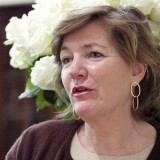 Nina Buhne joined Sotheby's in 1987, and as Senior Director works closely with the Managing Director of Sotheby's Germany. She was appointed Co-Head of the Frankfurt office in 1990, and since 1996 has been responsible for valuations in Germany.

In that role, she has been involved in all of Sotheby’s major auctions in Germany, including those of The Thurn und Taxis and Baden-Baden Collections, as well as contributing to all Sotheby's London sales of 20th Century German Art. Over the course of her career, Ms Buhne has developed strong relationships with collectors throughout Germany.