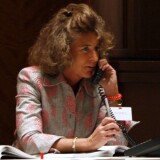 Since joining Sotheby’s Prints department in 1980, Mary S Bartow has overseen sales of both European and American 19th and 20th Century Prints and is also in charge of sales of Impressionist & Modern Prints.

Ms Bartow has been responsible for cataloguing the works of Mary Cassatt, Winslow Homer, Henri Matisse, Pablo Picasso, Henri Toulouse-Lautrec and James A McNeill Whistler, amongst others. In addition, she has worked on the auctions of Audubon’s The Birds of America for the family of Lord Caledon in 1983, for the Archives of the City of New York in 1985 and for the George Peabody Library of Johns Hopkins University in 1989.

Ms Bartow graduated with Honours from Smith College and obtained a Master’s degree in Art History from Johns Hopkins University as a Katzenellenbogun Scholar specialising in Northern European Art.