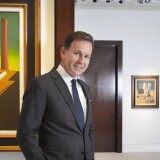 An eminent international specialist, Mario Tavella joined Sotheby’s in 1991 after completing a degree in Economics and thereafter completing the Fine and Decorative Arts curriculum at Sotheby’s Institute. He was appointed to the European Board of Directors in 1998 and promoted to Deputy Chairman in 2003. Mario has held the title of Chairman, Europe since 2016.
A pivotal figure in the decorative arts domain, Mario has been both the creator and curator of the prestigious Treasures sale which he launched in 2010.

During his tenure at Sotheby’s he has been the mastermind behind over 60 renowned Single Owner collection sales in London, New York, Paris and Milan, many of them breaking new records, amongst which are the collections of Giuseppe Rossi, Lili & Edmond J. Safra, Gianni and Marella Agnelli, Alberto Bruni-Tedeschi, Ariane Dandois, Dimitri Mavrommatis, Gianni Versace, Leon Levy, Les Dillée, Robert de Balkany, Henri Chwast and most recently Pierre Bergé in 2018 in Paris (€27.4 million).

Since his Chairmanship of Sotheby’s France, Sotheby’s Paris has consecutively realised the highest turnover of sales, culminating in €255 million in 2018.

Mario regularly contributes articles of new and exciting discoveries in academic publications. His articles have been featured in Apollo, Country Life, the Furniture History Society, Antologia di Belle Arti, and the Burlington Magazine.