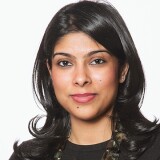 Manjari Sihare-Sutin joined the Modern and Contemporary South Asian Department at Sotheby’s in 2015. She brings a breadth and depth of knowledge to her role acquired over twelve years of experience in the field. Manjari has  worked extensively with a range of both institutions and private collections in India and the United States. Leading public institutions she has served in New Delhi include the Lalit Kala Akademi, Goethe Institut and The Biennale Society as well as Gallery Espace and  Savara Foundation for the Arts. Upon moving to New York in 2010, Manjari became Studio Manager for leading South Asian contemporary artist, Rina Banerjee. She subsequently worked in the New York offices of leading Indian auction house Saffronart, launching and managing their blog and special online projects.  Prior to joining Sotheby’s, Manjari held the position of Curatorial Manager for Queens Museum, New York where she helped plan, implement and present over twenty international art exhibitions including Citizens of the World: Cuba in Queens/Cuban Contemporary Art from the Shelley & Donald Rubin Private Collection (2013); 13 Most Wanted Men: Andy Warhol and the 1964 World’s Fair (2014); After Midnight: Indian Modernism to Contemporary India 1947/1997 (2015), among others. Manjari brings a unique perspective to her role at Sotheby’s based on her engagement with a broad gamut of constituents including leading artists and curators, major donors, elected officials and the media. She holds two graduate degrees in Art History and Visual Arts Administration: from the National Museum Institute, New Delhi and the New York University, respectively.