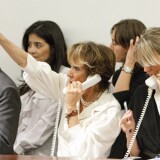 Ms Russo was also responsible for the sale of Lucio Fontana’s Concetto Spaziale in February 2009 in London for $6.4 million, one of the top five auction prices for the artist.

Ms Russo maintains exclusive advisory relationships with a number of major Turin-based collectors who participate at the highest levels in Sotheby’s sales.