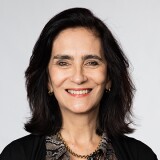 Katia Mindlin Leite-Barbosa joined Sotheby’s over 20 years ago and was named President of Sotheby’s Brazil in 2011, following the opening of our office in São Paulo. She has co-authored the book Istanbul – Guide to a Fascinating City, which was published in December 2010 and contributed to an article on Brazil in The International Art Markets: The Essential Guide for Collectors and Investors, organised by James Goodwin. Ms. Leite-Barbosa is the former director and current board member of MAM (Museum of Modern Art of Rio de Janeiro). She also serves on the board of AAPI (Associação de Amigos do Paço Imperial) and AMFEK (Amigos da Fundação Eva Klabin). Ms. Leite-Barbosa has a degree in architecture and a family background closely linked to Brazilian art and culture.