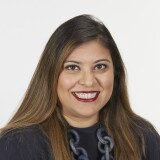 Ishrat Kanga joined Sotheby's in 2010 after graduating from Christie’s Education with a Master of Arts, specialising in Impressionist, Modern and Contemporary Art and Artworld Practice. Her thesis was titled Women and War: Political Art in the 21st Century.

Prior to her Master's degree, she completed a Bachelor of Arts degree with a double major in Art History and Psychology at McGill University in Montreal, Canada. After gaining valuable experience by working in various departments across the company, including Impressionist and Modern Art, Contemporary Art, Old Master Paintings and Early British Pictures, she joined the Modern and Contemporary South Asian Art department as a graduate trainee. She has worked on several important collections including The Amaya Collection in 2013, which achieved $6.7 million and was the first single owner sale in the category to be held internationally since 2000. In 2017, Ms. Kanga completed her training as a Sotheby’s auctioneer and has taken several auctions since.

In her current role as Director, Head of Sale, she is responsible for sourcing and selling property for the annual London and New York Modern and Contemporary South Asian Art Auctions along with producing the catalogues for the sales. She also works on establishing Sotheby’s key client relationships with new and emerging collectors worldwide and advising a portfolio of HNW clients on their collections, acquisitions and conducting regular valuations of art for auction and insurance purposes. Ms Kanga lectures on South Asian Art and the market for the Sotheby’s Institute of Art in London to both undergraduate and graduate degree students.