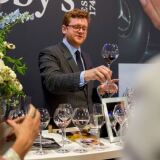 Hugh Machin joined Sotheby’s Wine Department in 2010 and spent several years working on numerous landmark sales, until the creation of the Spirits Department in 2019. In his current role, Hugh is responsible for sourcing consignments, providing valuations and advising international Spirits collectors and enthusiasts.

Hugh has been closely involved in the sales of major Spirits collections, most notably The Ultimate Whisky Collection Part I & II (2019 & 2020) which resulted in many auction records, including the world’s most expensive bottle of wine or spirits The Macallan Fine & Rare 60-year-old 1926, which sold for $1.9 million.

Hugh has played a vital role in launching the Spirits Department, which has seen its dominance within the Fine and Rare market increase dramatically since its creation in 2019. With his in-depth knowledge and passion, Hugh his helping to strengthen the position of Sotheby’s Spirits Department as a market leader.

Prior to Sotheby’s, Hugh worked in the art world and held positions at Mayfair galleries and art charities. Hugh holds a Masters Degree in History of Art from the University of Aberdeen and is currently undertaking his WSET Diploma in Wine and Spirits.