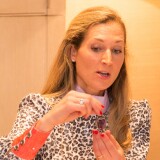 Helen is an innovator in the field of Fabergé, establishing new markets, landmark sales and world auction records for Fabergé, Icons and Soviet Porcelain. With an emphasis on quality and aesthetics, she works closely with private collectors and was most recently entrusted with the sale of Fabergé and Vertu from the Brooklyn Museum of Art, which was 100% sold and achieved £3.3 million agains a low estimate of £1m.

A leader in her field, she consistently brings unique Russian works to the market and has led the Russian department at Sotheby’s since 2019 and previously had a decade of experience at Christie’s. Throughout her career, she has been instrumental in establishing market share in the area of Fabergé and Russian Works of Art. Her focus on driving the market for quality, has led to several record prices, including a world auction record for a Fabergé icon in 2020, a record for an Imperial Presentation snuff-box by Fabergé and a world auction record for a piece of Soviet Porcelain. She comes with a diversity of experience bringing access and knowledge of the market to the field.

Helen has also successfully negotiated Private Sales for Russian works of art for over £1m and innovated selling exhibitions internationally. Most recently, she has led the sale of a number of important private collections, including that of the Brooklyn Museum of Art, an important Swiss Collection of Russian military orders and a private group of Fabergé highlighted by an exceptional and rare sedan chair and an automated rhinoceros, which established a world record.

Helen Culver Smith holds an MA with distinction from the Courtauld and a BA in Art History from Princeton University. She holds professional qualifications from Oxford, The London School of Economics and Gem-A.