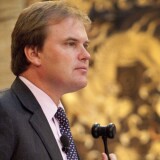 Harry Dalmeny joined Sotheby’s in 1991, initially working in the Old Master, Furniture and Silver departments. In 1993, he joined the House Sales department, becoming a Director in 1999. In February 2003, Lord Dalmeny was appointed Chairman of Sotheby’s Olympia and now, as an integral part of the Chairman’s office at New Bond Street, he has executive responsibility for Business Development and continues to lead the Country House & Single-Owner Sales department.

Harry has organised many Single-Owner and Country House sales, ranging from attic sales at Chevening, Stansted Park and Chatsworth to the sale at Ickworth and the disposal of The Collection of the Earls of Warwick.

He is one of Sotheby’s Senior Auctioneers and was on the rostrum during both the record-breaking Benacre sale in 2000 and the successful sale of Christian, Lady Hesketh’s Collection in March 2007. His role includes client liaison, through which he has developed close connections with many of the leading buyers and dealers in this diverse field.