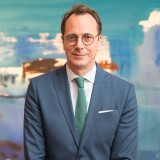 Gallus Pesendorfer, Director, studied classical archaeology and art History in Innsbruck, Austria, and received his diploma in art business in London in 2004. He joined Sotheby’s in 2004, initially working in the Munich office.

In 2005, he was responsible for the logistics of the biggest Schloss sale ever held in Germany – “Works of art of the Royal House of Hanover”. In 2006 he moved to Sotheby’s Vienna as a business getter and press officer. In 2008, he was appointed Deputy Director of Sotheby’s Austria. A highlights of Gallus Pesendorfer’s career was the extraordinary discovery of an ancient treasure stored unnoticed decades in a villa in Graz – a Roman marble torso, and a marble group, which had been part of the legendary collection of Lorenzo de Medici and was auctioned for a total $10 million in New York in June 2010. In early 2011, Gallus Pesendorfer moved from Sotheby’s Vienna to become Head of Sotheby’s Cologne. After four years in Cologne, he decided to relocate to Munich, where he joined the Munich team as Director and Senior Business Getter. In early 2020, after nine years, he returned to the Vienna office.