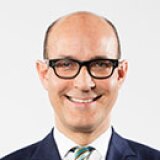 Frank Everett began his jewelry career with the Italian house of Bulgari in San Francisco, which allowed him to explore his appreciation and passion for jewelry. Largely self-taught in the areas of design, history and gemology, he later joined Tiffany & Co., moving quickly into management and relocating first to Philadelphia, then to Miami and finally to Los Angeles to oversee the West Coast market. After a long and successful run at Tiffany & Co., Frank fulfilled a dream by joining the legendary house of Harry Winston.

In 2013 Frank joined Sotheby’s auction house in New York as Senior Vice President and Sales Director for Jewelry. It was here that his knowledge and expertise of the design and history of great period jewels (and the women who wore them) allowed him to emerge as a trusted authority in his field. In 2014 he oversaw the jewels offered in The Collection of Mrs. Paul Mellon which achieved $43.8 million for the benefit of the Gerard B. Lambert Foundation. In 2017 Frank singlehandedly brought to auction The Personal Collection of Shaun Leane, forty-two pieces created through a twenty-year partnership with Alexander McQueen for his runway shows, most of which had been exhibited in the record-breaking museum show “Savage Beauty” at The MET and the V&A. The sale was described as “a watershed moment for artist’s jewelry” by The Financial Times, as well as being featured in The New York Times. Frank partnered with Carol Woolton, jewelry editor at British Vogue, in 2019 to create the beautiful selling exhibition of floral jewels “IN BLOOM”, gaining more international press in the NYT, Vogue and Town & Country. In 2020 he oversaw the promotion of the extraordinary jewels offered in the Collection of Cecile Zilkha. Most recently he partnered with model, activist and author Christy Turlington Burns to host a charity auction in support of her non-profit, Every Mother Counts, helping raise more than $200,000 to honor the organization’s ten-year anniversary.