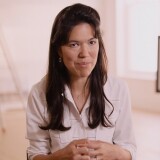 Frances graduated with a degree in History of Art from Trinity College, Cambridge, and completed a Master of Arts degree in Early 20th Century British and French Art at the Courtauld Institute, London. In 2015, Frances joined the BBC Antiques Roadshow team as a specialist in pictures and is a Trustee of the leading UK arts charity Outside In. Frances also serves as an auctioneer.