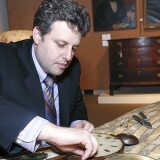 Erik Gronning joined Sotheby’s in 2004. He is a noted American furniture scholar who has written extensively on late 17th and early 18th century American furniture for numerous publications, including The Magazine Antiques, The Catalog of Antiques and Fine Art and American Furniture and the Chipstone Foundation’s yearly journal. He is currently researching New York seating furniture and a group of early Queen Anne Maine case furniture.

Prior to joining Sotheby’s, Mr Gronning was an active American furniture dealer and member of the Antique Dealers Association of America as well as numerous state dealer associations. He has worked for the New York Historical Society and the American Folk Art Museum and continues to advise various other institutions, including the Historic Warner House in Portsmouth, New Hampshire. He also is a National Council board member of the Strawbery Banke Museum in Portsmouth, New Hampshire.