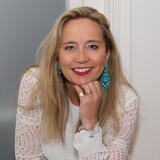 Sarah de Clercq is the managing director of Sotheby’s The Netherlands and a senior expert on 19th and early 20th century European & Dutch Art.

With twenty years’ experience in the art market, and far reaching expertise in her field she has strong relations with collectors and institutions in The Netherlands and abroad. Sarah joined Sotheby’s in January 2018, from Christie’s Amsterdam, where she has been a specialist since 2000. Since 2005 she was Head of Department of the 19th Century European Art Department (2005-2009), Head of the Impressionist and Modern Art department (2009-2013) and Head of the Old Masters and 19th Century Art Department (2013-2017).

She sits on the board of several renowned associations, including the Titus Cirkel of the Rembrandt Association, the classical music festival Grachtenfestival, Panorama Mesdag and the castle and estate Duivenvoorde Foundation. Furthermore, Sarah is the author of numerous articles, books, and exhibition catalogues on 19th and early 20th century Dutch paintings, particularly the work of Hendrik Willem Mesdag (2015) and Johannes Evert Hendrik Akkeringa (2010). Sarah also works closely with museums, organising exhibitions and advising museums on exhibitions and acquisitions of 19th-century and early 20th-century art.

Sarah holds a Master of Arts degree in History of Art from Groningen University and studied at the University of East Anglia.

Sarah is a sworn and certified valuer of the Dutch association of valuers, brokers and auctioneers Federatie TMV.