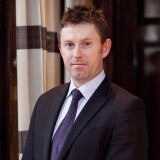 Damian Tillson joined Sotheby’s in 2000. In his current role, he provides valuations for both private vendors and the wine trade, advises collectors, investors and wine enthusiasts and inspects cellars across the United Kingdom and Europe.

Mr Tillson has been involved in many notable sales, including the historic Château d’Yquem "super lot" sold in April 2008 for £368,000 ($724,371), a record for a single lot sold at Sotheby’s London. Soon after joining the firm, he was instrumental in collecting, shipping and cataloguing the wines for the successful Great Collection single-owner sale of June 2001.

Damian’s passion for wine has taken him through the highly regarded WSET education program, and in June 2003 and 2004 he sat the Master of wine examination. He is a Bordeaux Judge for the Decanter World Wine Awards and hosts regular lectures on wine tasting, the fine wine market and wine as an alternative investment.