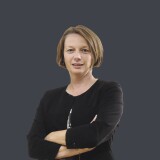 Prior to coming to New York, she spent four years in our London Ceramics & Glass department where she was Deputy Director. She began her career at Sotheby’s in 1989 in the Sussex Ceramics & Oriental Works of Art department and has served as an Auctioneer since 1991.

Ms Prescott-Walker graduated with a Bachelor of Arts Honours degree in Art History from the Courtauld Institute of Art, University of London, in 1989.