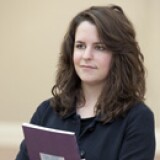 Bryn graduated with a dual focus in Art History and Psychology from the University of Wisconsin, Madison and went on to complete her Master’s Degree in Late 19th Century British Painting at the Courtauld Institute of Art, London.