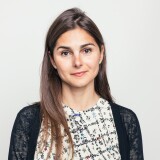 Brooke Lampley is Chairman & Worldwide Head of Sales for Global Fine Art at Sotheby’s. She leads strategy and direct management of fine arts departments globally, across auction, private sales and marketplace channels. She continues to advise a bespoke group of the world’s top collectors of 20th Century art.

Brooke has secured numerous high-profile consignments in her career and driven landmark prices in a variety of selling categories from 20th Century art to jewelry and design. Her clients have purchased world record works by artists as diverse as Gerhard Richter, Pablo Picasso, Dana Schutz, Jasper Johns, Matthew Wong, Louise Bourgeois, and Jean-Michel Basquiat. In 2019, she was pivotal to establishing the world record price for any Impressionist work of art with the $110.7 million sale of Claude Monet’s “Meule”. Brooke is equally prolific in auction and private sales with particular emphasis on the market for Modern masterpieces.

Recognized in Art + Auction's annual Power List, Crain's 40 Under 40 (2012), and Bloomberg’s Masters in Business series (2018), Brooke is a widely sought after industry commentator consulted for her view on the art market and trends. She has been a regular contributor to broadcast television shows such as NBC’s The Today Show, CNBC, Fox Business and Bloomberg, in addition to various print media.

Prior to joining Sotheby’s in January 2018, Brooke led the Impressionist and Modern art team at Christie’s, where she served as Head of Department from 2012 and Specialist since 2005. Brooke previously worked in curatorial departments at The National Gallery of Art and The Hirshhorn Museum and Sculpture Garden, each at the Smithsonian in Washington, D.C., and The Fogg Art Museum in Cambridge, Massachusetts. She holds a Master of Arts degree in History of Art from Yale University and a Bachelor of Arts degree in Literature and History of Art from Harvard College.