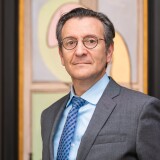 Benjamin Doller joined Sotheby’s in 1979 and in his more than 35 years with the company has sold close to $2 billion in art. He is a Senior Expert in 19th and 20th Century European & British Art and has been involved in securing major sales of Impressionist and Modern paintings as well as American, Latin American and Old Master pictures.

Mr. Doller oversees a diverse client base: Since 2007, he has been instrumental in the sale of major works by Rembrandt, Turner, Matisse, Picasso and Warhol, to name a few. Over the years he has sold works for most major United States museums, including the Metropolitan Museum of Art, the Kimbell Art Foundation, the Los Angeles County Museum, the Museum of Fine Arts, Boston and the Corcoran Gallery of Art in Washington DC. He has been involved in the auction of paintings from the Estates of Walter P Chrysler Jr, Jacqueline Kennedy Onassis, the Duke and Duchess of Windsor, Pamela Harriman, Bunny Mellon, and he helped orchestrate the landmark sale of Fabergé from the Forbes family. In 1987, Benjamin was part of the team that sold works from the Estate of Andy Warhol, whom he had known personally since 1978.

In addition to serving as Senior Auctioneer for Sotheby’s, Mr. Doller volunteers his time at charity auctions throughout the country and as auctioneer for these benefits has raised well over $50,000,000.  Benjamin is currently a member of the Board of Directors of the USTA Foundation.