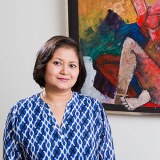 Anuradha Ghosh-Mazumdar was appointed Head of the Indian & Southeast Asian Art department in New York in 2011. Ms. Ghosh-Mazumdar joined Sotheby’s in 2003 as a Specialist for both Classical as well as Modern Indian art. Over the past 16 years she has played a key role in securing major consignments for Sotheby’s sales of Indian, Himalayan & Southeast Asian Art and Modern and Contemporary South Asian Art held in Asia, Europe and the United States. She has also built and nurtured many of Sotheby’s key client relationships in these markets, particularly in North America, a task she continues to perform in addition to her managerial duties as Department Head in New York. In recent times, as Senior International Specialist, she has been traveling extensively internationally for both business getting and business development of Sotheby’s sales and audiences worldwide.

During her time at Sotheby’s, Ms. Ghosh-Mazumdar has provided expertise for landmark sales of Indian and Himalayan art including the Jucker Collection of Himalayan Paintings (2006), Property from the Collection of the Albright-Knox Art Gallery (2007), Indian miniature paintings from the Estate of Ananda K. Coomaraswamy (2009), the Stuart Cary Welch Collection (2011), the Estate of Dr. Claus Virch (2015 & 2016), and most recently the Richard R. and Magdalena Ernst Collection of Himalayan Art (2018). In 2017 she was instrumental in securing a prestigious consignment from the Cleveland Museum of Art. In March 2019 she was responsible for sourcing and selling a rare 14th Century thangka which achieved a price of $2.4 million USD, a record for any Tibetan painting at auction.

Ms. Ghosh-Mazumdar has lectured widely on the South Asian art market at both private and public forums, most notably at the Johns Hopkins School of Advanced International Studies (2006), the University of Cambridge’s Judge Business School (2009), the Aga Khan Museum, Toronto (2015), and the Seattle Asian Art Museum (2016). She has also lectured student groups from Cornell University's Johnson School of Management (2013) as well as from Sotheby's Institute of Art (2018 and 2019).

Prior to joining Sotheby’s, Ms. Ghosh-Mazumdar worked at The Asia Society Museum in New York promoting the institution’s Arts & Culture programs. In 2001, she completed her Master’s degree in Museum Studies from the Fashion Institute of Technology in New York, her dissertation being on Gandharan Bodhisattva sculptures. In 1995 she was the gold medalist in the Master’s degree program in Ancient Indian Art History and Archaeology from the University of Calcutta, India. In addition to her expertise in art history Ms. Ghosh-Mazumdar has prior experience in the fields of Advertising and Marketing and is currently completing a Certificate course in Wealth Management at New York University.