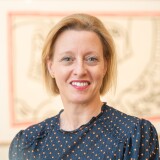 Alexandra Schader joined Sotheby’s Spain in 2006 and is currently the Director of the Modern and Contemporary Departments in Spain. She has profound knowledge of the contemporary art market in Spain, has helped to develop the markets in these fields, and liaises with the Latin American Art and Prints Departments worldwide.

Prior to joining Sotheby’s Spain,  Ms. Schader worked in the Latin American Art Department at Sotheby’s New York from 1993 to 1997. In 1997, she returned to Spain and was a specialist in the Marlborough Gallery in Madrid, where she was named co-Director in 2005.