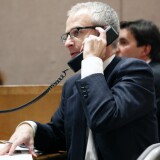 Alberto Chiesa, Director, Sotheby’s Italy, joined the company in 1999 as Head of the Old Master Paintings department in Milan after studying History of Architecture at Polytechnic of Milan. After his apprenticeship in the studio of his father, the famous antique book dealer Carlo Alberto Chiesa, Mr Chiesa moved to London where he worked as a private art advisor. Just prior to joining Sotheby's in Italy, he researched and catalogued the Italian section of Sotheby's sale of Burghley House in Stamford.

In June 2001, he was responsible for achieving one of the highest prices ever paid for an Old Master Painting in Italy, L 1.534.000.000, for a tondo by Lorenzo di Credi, a contemporary of Leonardo da Vinci. In May 2006, he was responsible for finding and selling a cycle of three paintings by Tiepolo and two by Bambini, which set the highest auction price achieved in Italy for a work of art, €.6.1 million.