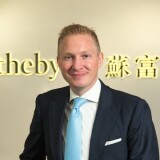 Adam Bilbey joined Sotheby’s in June 2015 as Head of Sotheby’s Wine, Asia, bringing with him over fourteen years of experience in the fine wine industry. Based in Hong Kong, Mr. Bilbey will lead Sotheby’s Wine team in driving the Company’s wine auction and retail business throughout Asia.

Throughout his career Mr. Bilbey has worked in the United Kingdom, Australia and various locations in Asia including Hong Kong and Japan, gaining exposure across different facets of the fine wine business. Prior to joining Sotheby’s, he was the Sales Director of Berry Brothers and Rudd, where he was responsible for driving sales and business growth in Hong Kong and Greater China. He possesses a proven track record in sales and has established strong connections with wine clients around the region. During the mid-2000s, Mr. Bilbey spent two years working under the late Dr. Bailey Carrodus at the famed Australian Winery, Yarra Yering, where he acquired hands-on knowledge of vineyard management and winemaking.

With a passion for sharing his knowledge and enthusiasm for fine wines, Mr. Bilbey is a frequently quoted source in such publications such as Decanter and The Drinks Business, and was a Contributing Expert to the Little Red Book, a fine wine magazine published on behalf of HSBC for the bank’s high net-worth China-based clients. Mr. Bilbey has appeared as a wine expert on the BBC 2 Sunday morning lifestyle television programme “Something for the Weekend” and in 2009 was named “Man of the Year for the Service Industry” by Esquire UK.