'The objects that go into my paintings are common objects from anywhere: a pitcher, a mug of beer, a pipe, a package of tobacco, a bowl, a kitchen chair, a plain common table--the object at its most ordinary. I want to tell something by means of the most common object; for example, a casserole, any old casserole, the one everybody knows. For me it is a vessel in the metaphoric sense, just like Christ's use of parables'

- Pablo Picasso to Francoise Gilot in 1944

Clawing its way into the foreground, the titular lobster is the focal point of Crustacé et bouteille, its bright body holding the viewer’s gaze and its splayed legs complementing the strict delineation of furniture in the background. The palette is carefully chosen, blue and green set against white and lilac, the natural world against the domestic interior. Picasso presents the heady indulgence of a favoured dish, steeped in art-historical references.

Crustacé et bouteille is one of three paintings depicting a lobster that Picasso completed the day after Christmas in 1948, and demonstrates the artist’s enduring commitment to the still-life genre (fig. 1). Throughout the early 1940s, still-life painting enabled Picasso to approach difficult existential subject matters obliquely (fig. 2). Frances Morris wrote about Picasso’s still-life works during this period of turmoil: 'Above all it was the still-life genre that Picasso developed into a tool capable of evoking the most complex blend of pathos and defiance, of despair to hope, balancing personal and universal experience in an expression of extraordinary emotional power' (F. Morris in Paris Post War, Art and Existentialism 1945-1955 (exhibition catalogue), Tate Gallery, London, 1993, p. 155). Picasso’s later still-life works, whilst dating from a happier and more peaceful time, lose none of this emotive power. For Picasso, the still-life was always a means of relaying a narrative. Art historian Marie-Laure Bernadac unpicks Picasso’s treatment of his still-life subjects, observing that: ‘Indeed under each pot, bowl of fruit, or guitar, there lurks a story, a person, or an anecdote that is part of the painter's life. Because of the autobiographical nature of his art, and because he assigned an equal value to the animal, mineral, plant, and human realms, he painted whatever was around him. When he was at the seashore, he painted fish and crustaceans’ (M.-L. Bernadac in Picasso and Things (exhibition catalogue), The Museum of Modern Art, New York, 1992, p. 22). There is an element of self-portraiture in the vibrant colours and dissecting lines of Crustacé et bouteille; Picasso manipulates a domestic scene to invoke a particular atmosphere indicative of his mood at the time.

The lobster motif held particular significance for Picasso, as the rich visual history of the creature offered a multifaceted approach to its interpretation. An integral motif of the Surrealist movement, the lobster was employed frequently by Picasso, who executed Le grand homard rouge at the end of December in 1948 and later embarked upon a series of paintings depicting a lobster and a cat in 1962 and again in 1965 (see below).

PICASSO AND THE LOBSTER 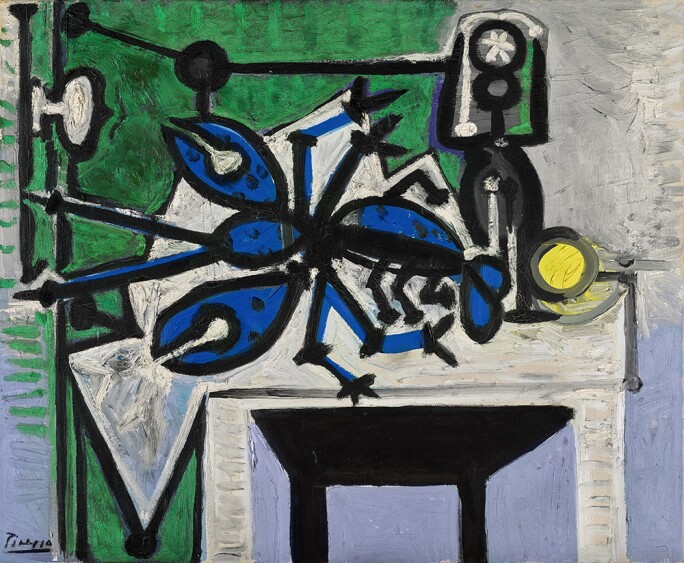 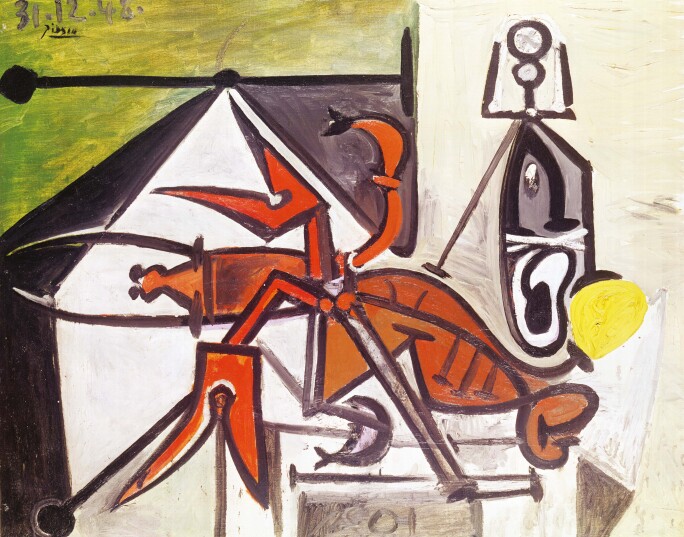 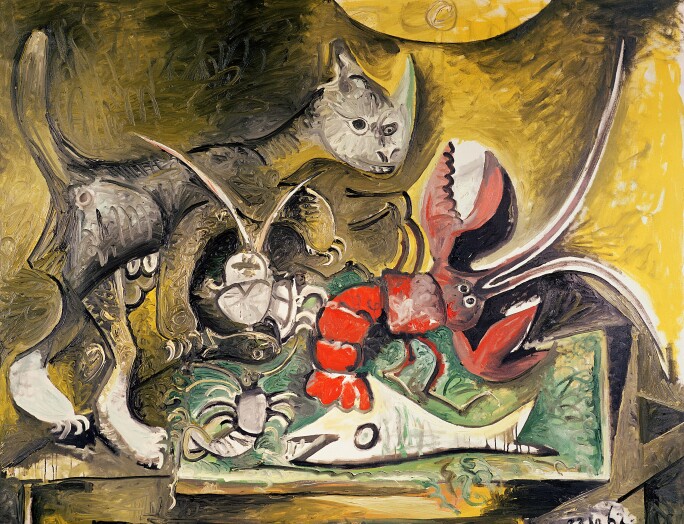 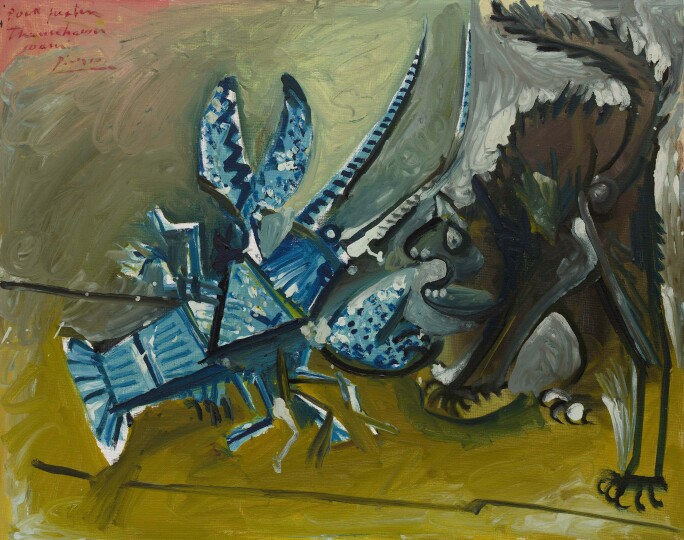 The lobster in the present work is blue and, therefore, ostensibly still alive. Although yet to be cooked, the presence of the bottle and the table upon which the lobster sits reminds the viewer of the creature’s imminent demise. Additionally, there is a faintly menacing aspect to the lobster, heightened by its spiky, barbed appearance. In the wake of the war this proximity to violence is intentionally uncomfortable. The arrangement, however, also alludes to works such as Willem Claesz. Heda’s Still Life with a Lobster (fig. 3). Still-life painting played a key role in the Dutch Golden Age and its rich art historical significance inspired Picasso to draw upon the genre and subvert it. Picasso frequently pitted himself against the Old Masters, returning often to the subjects of the European canon to reframe the way in which one views the world. In the present work, Picasso takes the still-life genre and imbues it with a psychological aspect that does not exist in its Old Master counterparts. The lobster in the present work is no longer just an object or an item of food. Picasso plays with the incongruous idea of the lobster as food, and the schematic treatment of form brings an element of humour to the work. Amidst strong black lines grounding the composition, Picasso applies softer tones of lilac, white and bright yellow. Painted in the depths of winter, the composition retains a sunny lightness indicative of the artist’s optimistic disposition. Picasso was experiencing a period of heightened personal fulfilment and creative inspiration; after the austerity of the war years, Picasso was living between Paris and the Cap d’Antibes with his partner Françoise Gilot. Gilot was pregnant with their second child Paloma, and Picasso had recently returned from a Communist Party Conference in Warsaw, where he had been well received. The vibrant colours and playful elucidation of form are evocative of the joy the artist experienced at this time.

In Crustacé et bouteille Picasso employs a highly graphic and linear composition that anticipates the later Pop Art movement (fig. 5) and reconceptualises the tradition of still-life painting. The primacy of line reflects the elegant and botanical portraits Picasso was creating of Françoise whilst also demonstrating a continuation of a theme Picasso began in November of the same year. When asked to revisit a memorial project upon the thirty-year anniversary of Guillaume Apollinaire’s death, Picasso created a large, abstracted canvas entitled La Cuisine (fig. 4). The fragmented lines and sombre palette of the work evoke a lyricism in homage to the poet, whilst also demonstrating Picasso’s ability to turn a domestic setting into a canvas through which he could approach more existential matters. This same ability is also exemplified in Crustacé et bouteille, which is both a vehicle for profound artistic expression, and a joyful evocation of Picasso's life in the post-war period.