Salman Toor’s work sees the artist draw on his imagination to create works that, whilst intensely familiar, reflect his highly personal experience as a queer Brown man living between New York City and South Asia. His compositions alternate between exuberance and threat, isolation and belonging. For every high-spirited dance party in a New York apartment we see a moment of intimacy interrupted by law enforcement; every depiction of a man achingly isolated within a crowd has its counterpart in private moments of tenderness and joy. Recently the subject of a widely acclaimed solo exhibition at the Whitney Museum of American Art, in which The Arrival was notably included, Salman Toor’s paintings, in the words of Roberta Smith, “begin to pluck at your heartstrings almost as soon as you see them.” (Roberta Smith, “Salman Toor: A Painter at Home in Two Worlds,” The New York Times, 23 December 2020 (online))

As Ambika Trasi, one of the curators of the Whitney show, observes: these are paintings that lean heavily the language of autobiography and memoir, whether real or imagined, and in doing so form part of a broader tendency in contemporary cultural production, most notably in literature – particularly, the work of such authors as Ta-Nehisi Coates, Ben Lerner, Rachel Cusk, Karl Ove Knausgaard and Ocean Vuong. These are narrative scenes, the context for which is provided by the viewer, projecting their own experience and interpretation onto the image.

“The Arrival” in which one man greets another at the door of an apartment is emotionally charged, like a biblical encounter, say, between Jesus and Saint John the Baptist. And it can’t be by chance that in several paintings, the light around the head of Mr. Toor’s main character burns bright, coalescing into something like a halo."

Exquisitely painted and carefully composed, The Arrival is a paradigm of Toor’s revolutionary oeuvre. The work depicts a liminal space that is equal parts anticipation and apprehension; with his back to the viewer, face visible only in profile, one figure opens his door to reveal his visitor, who, head titled downward as if in deference, looks up to meet the eye of his host. Arms hanging by his sides, the visitor exudes an aura of vulnerability and shyness—an air made only more pronounced by the stark contrast with the open body language of the other figure. There is no context provided for the scene, either by the work’s title or its composition. Perhaps these are two friends, one arriving forlorn in the wake of a troubling day, the other seeking to comfort him. Or, is this a romantic liaison, perhaps a first-time meeting, and the expression on the visitor’s face is reflective of his sense of trepidation and nervousness? Irrespective of the context, the painting depicts a moment on the precipice of action, a moment of uncertainty before the cards fall

" [Toor’s work] exerts an emotional pull that is rare, even in a time of outstanding figurative painting in which style and substance, motivated by issues of identity, regularly go hand in hand."

The sense of familiarity and relatability in Toor’s work is partly attributable to his constant allusion to the Old Master paintings which he spent years studying and copying, painstakingly adopting and incorporating their styles into his original compositions. In the present work, there can be no mistaking the similarity between the visitor and Rembrandt’s seventeenth century Head of Christ (Philadelphia Museum of Art); here, as in so many of Toor’s highly lauded recent paintings, the coalescence of light around the head of the figure is subtly reminiscent of a halo. There are elements of Toor’s style and compositional awareness that also demonstrate his rigorous study of the French Rococo, and the Baroque movement as a whole. Curator Ambika Trasi aptly notes that more contemporaneously, Toor is replicating Kerry James Marshall’s forceful insertion of colored bodies into the predominantly white canon of Western painting, and also drawing on the work of Nicole Eisenman, “who melds everyday contemporary life with art history in her uncanny figurative works that question power dynamics and hierarchies.” (Ambika Trasi, “The Self as Cipher: Salman Toor’s Narrative Paintings,” The Journal of Wild Culture, 29 November 2020 (online)) Like Eisenman, Toor grounds his otherwise timeless paintings in the present day through the inclusion of modern objects, such as smartphones, laptops and cars; in the present work, the subjects’ jeans ensure that despite the Old Master references, this is a resolutely contemporary painting. 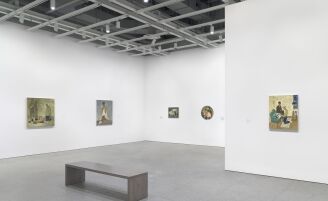 In order to make these works, which, as Trasi observes, operate “between academic painting and illustration, and between fiction and autobiography,” Toor works at speed, “holding the brush at arm’s length and moving his elbow more than his wrist to create a sketch- or illustration-like effect” and establishing a “literal distance between artist and surface of the board [which in turn] allowed Toor to establish space between himself and his subjects” (Ibid.) The works on board in particular, such as the present work, present as though still wet, rivulets and swoops of pigment lending a remarkable dynamism to the scene; within the present work, this sumptuous treatment of paint is especially evident in the virginal blue shroud of the visitor, and in the dark, curling hair of both men. Tender and poetic, familiar yet enigmatic, The Arrival epitomizes Roberta Smith’s observation that Toor’s work “exerts an emotional pull that is rare, even in a time of outstanding figurative painting in which style and substance, motivated by issues of identity, regularly go hand in hand.” (Op. cit.)