During his lifetime, William Bouguereau enjoyed extraordinary success, with wealthy patrons and devoted followers in Europe and America. Like many of his compositions, Au bord du ruisseau was sent to his Paris dealer Goupil’s New York associates, Knoedler & Co., who were responsible for placing the artist’s work in prominent Gilded Age collections from the Northeast through the Midwest. Bouguereau’s international fame was fueled by his brilliant skill as a draftsman and painter as well as his understanding of the art-buying public's taste. In the 1850s, Bouguereau, at the encouragement of his then dealer Paul Durand-Ruel, decided to shift away from large religious commissions and toward the type of imagery appreciated by his wealthy collectors. From the mid-1870s on, nearly a third of his work was devoted to peasant subjects, inspired by both a broad cultural trend and his own summer retreats from Paris to his childhood village of La Rochelle. Painted in 1879, a characteristically prolific year for the artist, Au bord du ruisseau captures two young girls as they prepare to wade into the water wetting the sand along the foreground. The work is remarkable in its large scale, which allows for an intimate study of his models’ complicated, yet casual, poses, set against a vast agrarian landscape. Au bord du ruisseau is among Bouguereau’s most masterful compositions of country life — a state of being perceived by his urban audience as uncomplicated, simpler and more gratifying. Moreover, Bouguereau’s patrons believed their acquisition of an emotive composition of a peasant child, such as Au bord du ruisseau, reflected their taste, refinement, and stature.

As a leading academic artist, Bouguereau contributed to the Paris Salon for over five decades, and in 1879 he presented two paintings with very different themes. One of the works became one of his most widely recognized and critically acclaimed, the spectacular mythological painting, Naissance de Vénus (fig. 1, 1879, Musée d’Orsay, Paris). Bathed in the soft light of dawn, Venus (whose pose is borrowed from Jean-Auguste-Dominique Ingres) rises from the sea, surrounded by putti, nymphs and satyrs who trumpet her arrival with conch shells. Its theatrically is unparalleled. An artistic tour-de-force, it was praised by critics at the Salon for its bold composition, heroic scale and supernatural perfection. Bouguereau’s other Salon entry of 1879, Jeunes Bohémiennes, provided an appropriately secular counterpoint to the extravagantly divine carousel of Naissance de Vénus (fig. 2). In it, a young woman (who has also been identified as an older sister or mother) holds a child within a vast landscape and confronts the viewer by staring out of the picture plane with a penetrating gaze. Exhibited together, some critics noted parallels of inspiration and technique between the two diverse subjects. As one writer explained: “though borrowed from the world of current realities, [Jeunes Bohemiennes] bears the mark of this mind floating between earth and heaven, along with the qualities inseparable from M. Bouguereau’s talent.”1

The model for the youngest “bohémienne” is immediately recognizable in Au bord du ruisseau standing at left, with dark curls of hair that frame her distinct facial features. The same youth appears in the artist’s La tasse de lait (fig. 3, sold in these rooms November 8, 2012, lot 44 ), and its related head study (Private collection, United States). While the name of Bouguereau’s subject, like many others, is largely unrecorded, the children of La Rochelle and Paris were the artist’s models, sketched both in studio and outdoors to capture their movement and behavior. While many of his contemporaries worked from photographs, Bouguereau did not. It is through this constant and focused observation, the wizardry of translating from three dimensions to two, that the depth of his models’ expressions and poses is captured. There is a naturalistic truth to Bouguereau’s representation of the two young girls with their rough-spun costumes, stockings carelessly crumpled on the ground, sun-touched skin, and shared glances. The casualness of the scene disguises the artist’s careful study, the intricately balanced poses and figural modeling informed by his early study of Renaissance masters. In 1850, Bouguereau was awarded the Prix de Rome, providing him the enviable opportunity to travel and study throughout Italy. Over the years, the young artist filled numerous sketch-books and canvases with copies of Renaissance masterpieces. Years later, he would remain profoundly moved by this experience, telling his students that they must “go and study antique genius at its original source, go and seek inspiration under those wonderful skies, in the midst of the delights of nature and the arts, in a hospitable villa, fully of shadows and poetry whose spell none of us who lived there can ever forget.” 2 This “spell” provided a powerful inspiration for a number of Bouguereau’s compositions, and critics frequently applauded the artist’s emulation of Italian Renaissance artists — particularly Raphael and Titian, who he brilliantly transformed for a modern audience. As the critic Louis Clément de Ris explained, “in taking Raphael at his point of departure, M. Bouguereau has shown that modern feeling can be accommodated in an ancient form.” 3 In the compositional arrangement of Au bord du rusisseau, Bouguereau alludes to Raphael’s masterworks such as the Madonna del Prato, while his smooth brushwork erases his presence, creating a balance between immobile, static form, and rich surface details, textures and colors (fig. 4). These real and ideal aspects of Au bord du russieau allowed it to be connected yet apart from the daily life of the nineteenth century— the very quality that made Bouguereau’s work so highly desirable to his audience.

Like many of Bouguereau’s most successful paintings, soon after it left his studio Au bord du Russieau was sent to the United States. As Clarence Cook commented in his 1888 Art and Artists of Our Time, “Hardly any French painter can be named who is more widely popular in America than Bouguereau. His pictures always meet with a ready sale at large prices, and at the exhibitions they are sure of approval from the majority of the visitors, who would probably pass by Delacroix, Decamps, or Puvis de Chavannes, with small notice, or none at all.”4 In his 1880 Art Treasures of America, Edward Strahan lists sixty-nine paintings by Bouguereau, featured in fifty-seven of the most prestigious collections in the United States, including those of Catharine Lorillard Wolfe, John Jacob Astor, Colis P. Huntington, William Rockefeller and William Vanderbilt. Travelling to St. Louis, Strahan noted Jeunes Bohémiennes (which he illustrated and named The Elder Sister) in the collection of the city’s prominent collector John Julius O’Fallon. Confusingly, Strahan also noted what seemed to be the same painting in the collection of Hercules Louis Dousman, whose fortune afforded him a private gallery in St. Louis before much of his collection, including Jeunes Bohémiennes, was sold at auction in 1884. The Goupil and Knoedler sale ledgers for the sale of Jeunes Bohémiennes and Au bord du ruisseau add to a mysterious connection between the two collectors. Au bord du ruisseau entered Goupil’s ledgers as Les jeunes baigneuses in June 1879 and quickly transferred to Knoedler, New York where it was recorded sold in September to O’Fallon (and around the same time Jeunes Bohémiennes was apparently first sold to Dousman). Strahan’s recollection or the sale ledgers may be in error, and without an available full inventory of O’Fallon’s collection, his probable ownership of the present work has yet to be confirmed. Yet the masterful Au bord du ruisseau was certainly a trophy for any competitive collector of the artist’s work, and continued to propel his international reputation. 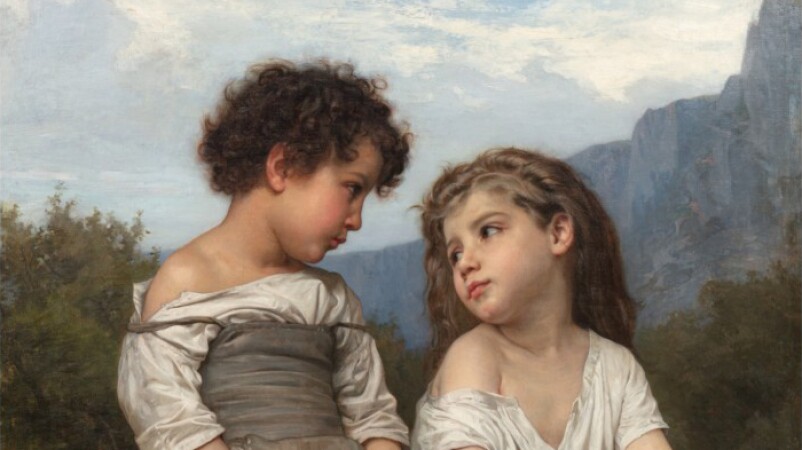