“After Wols, everything has to be done anew.”

A work of extreme rarity, La Turquoise exemplifies Alfred Otto Wolfgang Schulze’s visceral and metaphysical language of abstraction, as well as the artist’s powerful alignment with the philosophy of existentialism central to intellectual circles in Paris following the Second World War. Commonly known as Wols, the artist was, according to legendary critic Michel Tapié, “the catalyst of a lyrical, explosive, anti-geometrical and unformal non-figuration” (M. Tapié, 1953: Exh. Cat., London, Tate, Paris Post War: Art and Existentialism 1945-55, 1993, p. 181). La Turquoise debuted at Galerie René Drouin in Paris during the artist’s second exhibition in May and June of 1947. It is believed that Tapié acquired the present work from this show, and this prestigious provenance has become a testament to the painting’s significance within Wols’s extraordinarily concise oeuvre. Acquired from Galerie Rive Gauche in Paris by the family of the present owner in the 1950s, La Turquoise has been included in exhibitions at some of the most prestigious institutions across Europe, including The Louisiana Museum of Modern Art, Humlebaek (1959), Stedelijk Museum, Amsterdam (1961), Centre Georges Pompidou, Paris (1974) and Kunsthaus Zürich, Zurich (1989). Charged with frenetic energy and pulsating, biomorphic forms, the present work is one of the finest examples of Wols’s metaphoric abstract vision. Existentialist philosopher Jean-Paul Sartre attempted to decipher the artist’s gestural improvisation, and indeed his abstract imagery of our ‘universal horror of being-in-the-world’. He wrote, “Wols, human and Martian together, applies himself to seeing the earth with inhuman eyes: it is, he thinks, the only way of universalizing our experience… it is not our life that they [his paintings] manifest, nor even our materiality, it is our naked being, perceived from outside… foreign, repulsive, but ours; impossible to look at without vertigo, this being which we are, captive in them [his paintings] as the being which they are” (J.P. Sartre, 1963: Ibid., p. 181).

Wols was introduced to dealer René Drouin by celebrated avant-garde writer Henri-Pierre Roché, one of the earliest collectors of Wols’s work. Following their first encounter, Drouin staged Wols’s debut exhibition at Galerie René Drouin in December 1945. While the wider Parisian art world remained indifferent to the artist’s work following the show, the mesmerising, Surrealist drawings and watercolours fascinated an elite circle of philosophers, writers and artists, including prominent figures such as Sartre, Jean Paulhan, Francis Ponge, Georges Limbour, and André Malraux. Drouin’s role was pivotal in placing Wols’s work in front of such elite members of the Parisian intelligentsia, and it was Drouin who provided the artist with canvases and oils for the first time, encouraging him to experiment with abstraction on a larger scale. La Turquoise is the exquisite result of such experimentation; the painting is one of only forty works on canvas Wols created in the two years following his first exhibition of drawings, and one of only eighty works on canvas in the artist’s entire oeuvre. Indeed, Wols’s untimely death in 1951 at the age of 38 brought only six years of painterly production to a close; thus the artist’s small number of works on canvas are highly coveted and speak to the magnificent talent of an incredibly creative mind whose career was all too brief. 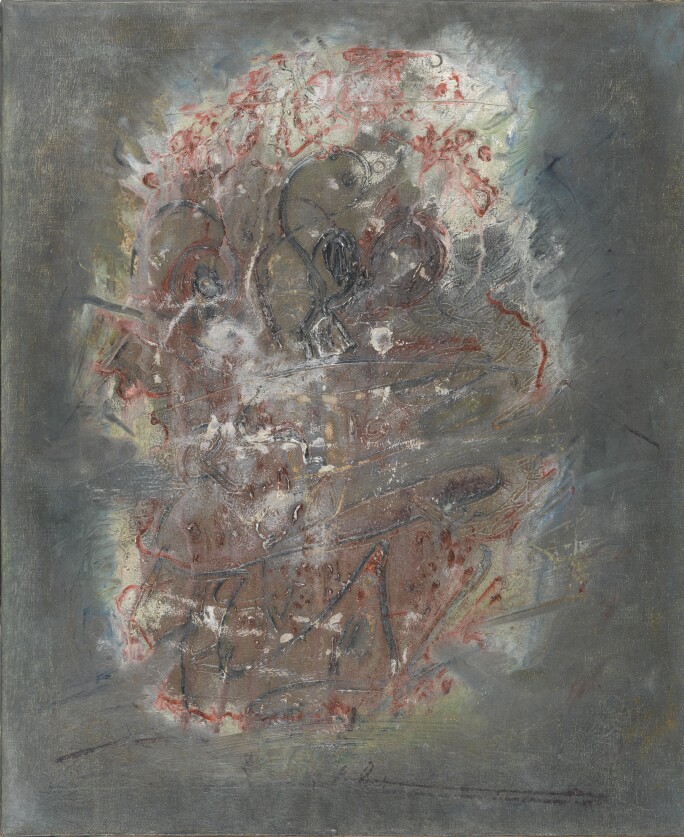 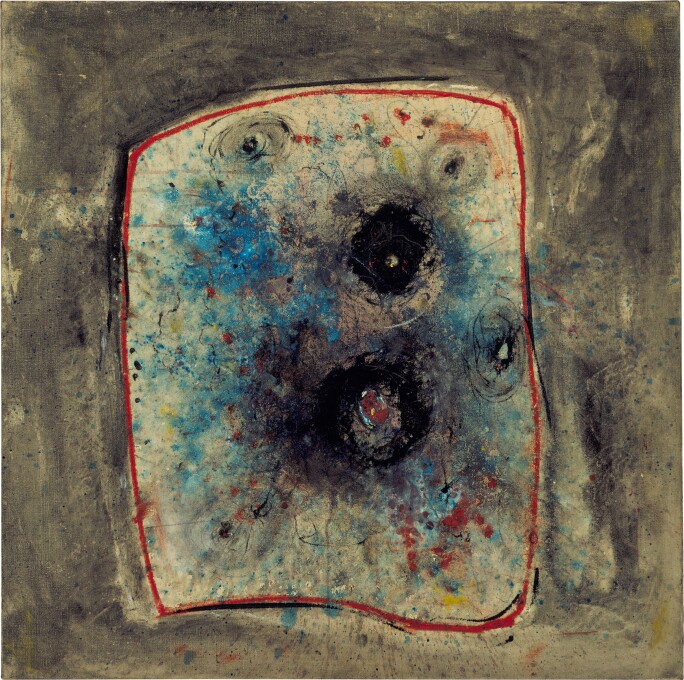 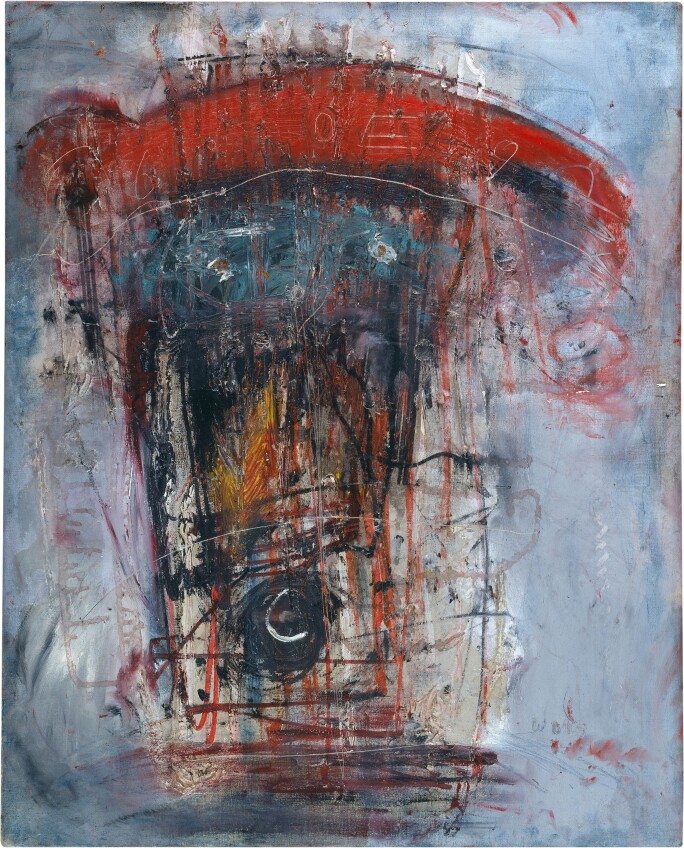 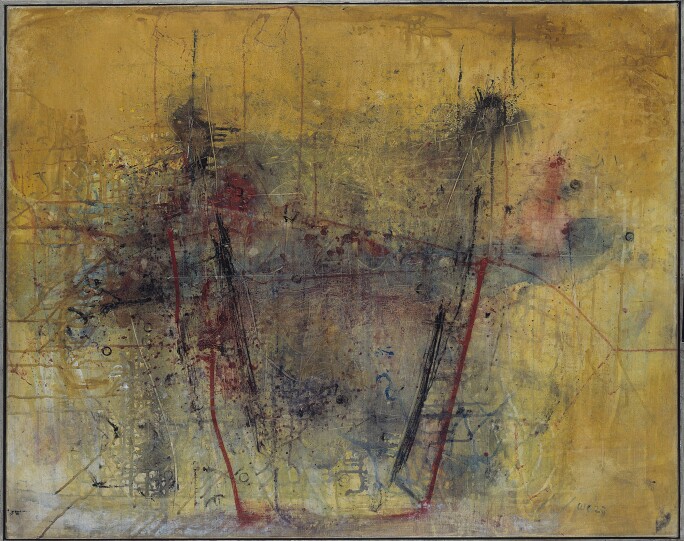 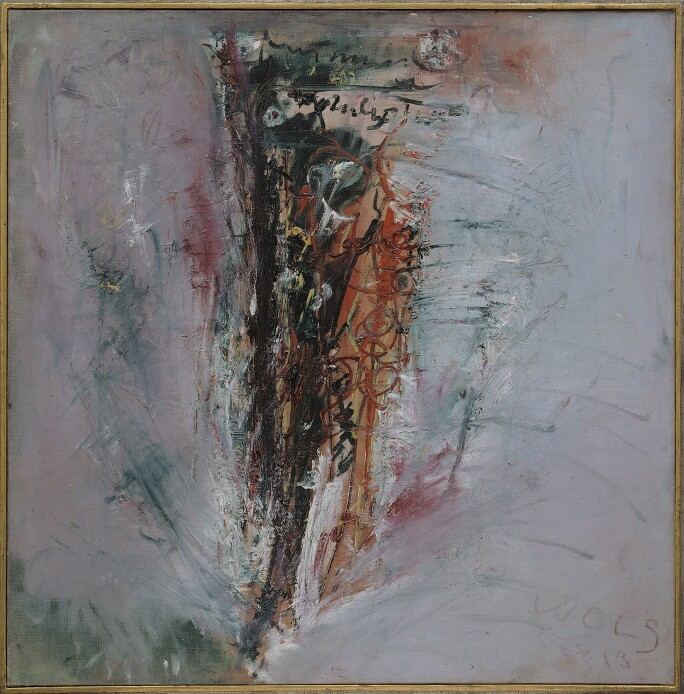 A student of Laszlo Maholy-Nagy at the Berlin Bauhaus, Wols subsequently moved to Paris in 1933 at the age of 19. His early career in photography was brought to an abrupt end by the onset of the Second World War, and in 1939 he was interned as an enemy alien, an experience that would have a profound impact on his aesthetic language in the years to come. The liberation of Paris provided a moment of catharsis to many artists caught in the atrocities of war, not least Wols, who began experimenting with abstraction as a tool with which to confront themes of trauma and despair. Rejecting the belle peinture style popular in Paris at the time, he pioneered a highly experimental mode of abstraction. For Wols, only a conceptual approach could pave the way forward, and address the incalculable void left behind by the war. Tate curator Frances Morris describes the violent physicality of Wols’s abstraction, a style not dissimilar to that of the artist’s contemporary across the Atlantic, Jackson Pollock: “Increasingly the object is subsumed in a chaos of space. Paint is stenciled, smeared, daubed and flung at the canvas and then incised using fingers or the wrong end of the paint brush. Liquid paint is allowed to flow freely and to coagulate, and the canvas is manipulated to allow rivulets to crisscross the surface. Elsewhere, paint is sprayed or flicked. When using the brush Wols seems to have become more and more confident in expressing a physical relationship with the canvas. Brushstrokes are laid on in curves that rhythmically echo the energetic gestures of the artist’s arm. Such arabesques are contrasted with circles of energy where the artist has used his wrist as if to tunnel into the canvas” (F. Morris cited in: Exh. Cat., London, Tate, Paris Post War: Art and Existentialism 1945-55, 1993, p. 181). It was this exhilarating, performative, anguished quality of Wols’s lyrical abstraction that won the artist the intellectual patronage of Sartre, who saw Wols’s work as an answer to the moral, existentialist questions of the time. Indeed, Sartre interpreted Wols’s work as expressions of psychological drama and human vulnerability, expressions which Sartre himself tried to articulate in his own literary works, such as Nausea (1938), Being and Nothingness (1943), The Age of Reason (1945) and Existentialism is a Humanism (1946) – the latter of which was written the very same year Wols painted La Turquoise.

Wols’s innate ability to render the strange, the desolate and the ungraspable is exemplified on the surface of the present work. Exhibited at the 1958 Venice Biennale, and at documenta in Kassel a year later, La Turquoise is a masterpiece of European abstraction, conveying an entirely new approach to painting at a pivotal moment in twentieth-century history. Executed on the eve of a new world order, La Turquoise is not only a revelation of anguish, but an image of the human condition – complex, uncertain, hopeful. As Wols himself declared, “My pictures are not a revolt against anything. In spite of misery [and] poverty… I love life” (Wols cited in: Ibid., p. 183).