The Mother and Child subject was to be one of the most important and iconic motifs of Moore’s career, and one which from the mid-1940s dominated his output for much of the following decade. Following a number of his small Family Group studies and maquettes made in the mid-1940s (see fig. 1), Moore began to explore this theme through the new motif of the rocking chair from 1947. Between 1950 and 1952 Moore produced four varying versions of the subject in bronze, based on a series of drawings made within his earlier Rocking Chair Notebook (see fig. 2) and subsequent maquettes in plaster, which remain some of the most important and deeply personal sculptures of his oeuvre.

The concept of the sculptures – the only kinetic pieces produced during his life – have their immediate origin in the idea of making a sculpture with movement for his young daughter Mary. An only child, Mary was born in 1946 after sixteen years of marriage and was, as Roger Berthoud writes, “in every sense a precious baby” (R. Berthoud, The Life of Henry Moore, New York, 1987, p. 197). Photographs show Moore doting on his young daughter throughout the years (see fig. 3). The knowledge that these works were conceived with her in mind makes them all the more significant in his oeuvre. Part of a series of four similarly scaled sculptures, Rocking Chair No. 2 captures the innate intimacy between mother and child and reveals the tender affection the artist had for his own family. These uniquely dynamic works retain a sense of whimsy and poignancy, with the familiar scenes of a child balancing on the knees of its mother as in the present work or being gleefully lifted in the air as in version No. 4.

“The rocking chair sculptures were done for my daughter Mary, as toys which actually rock. I discovered while doing them that the speed of the rocking depended on the curvature of the base and the disposition of the weights and balances of the sculpture, so each of them rocks at a different speed.” 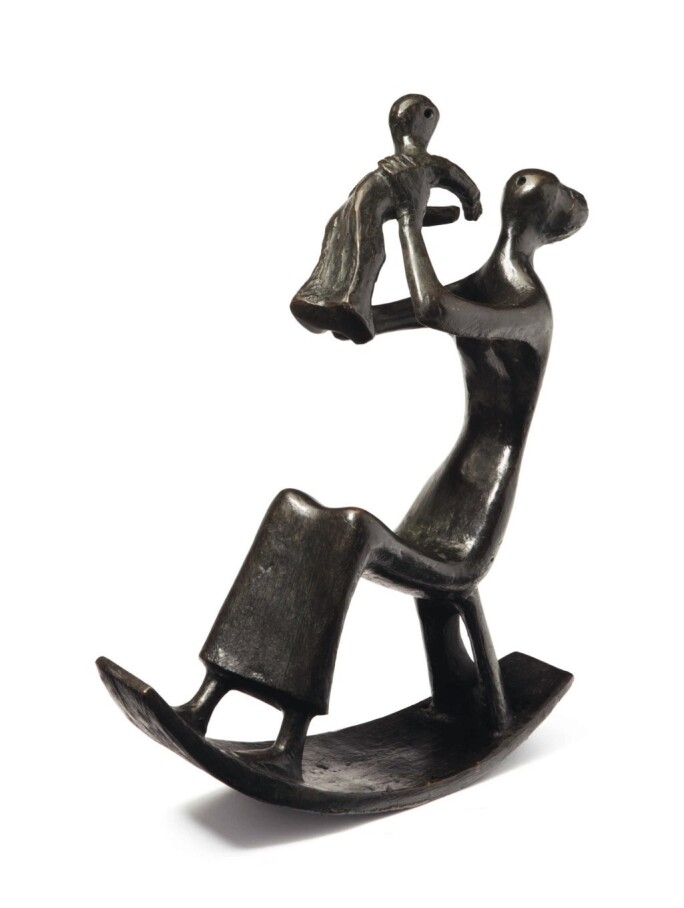 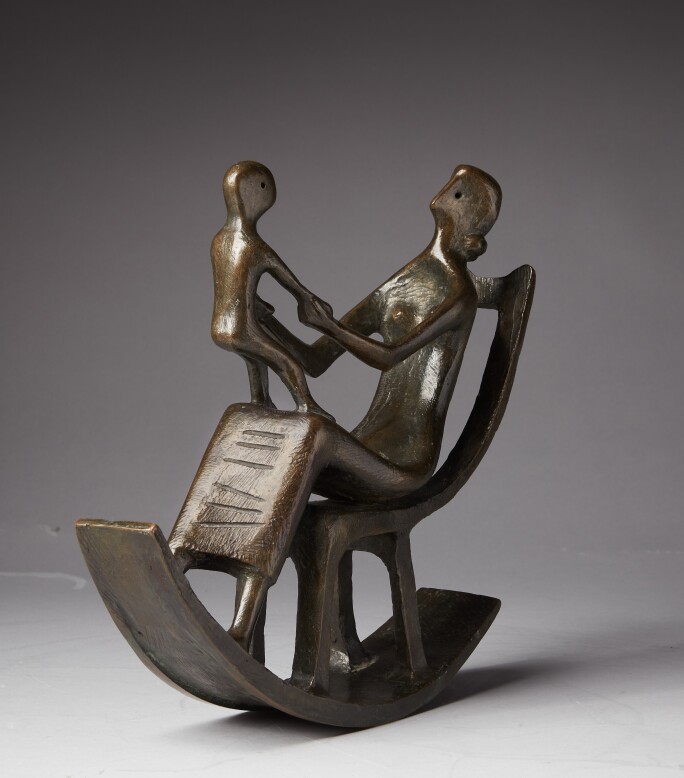 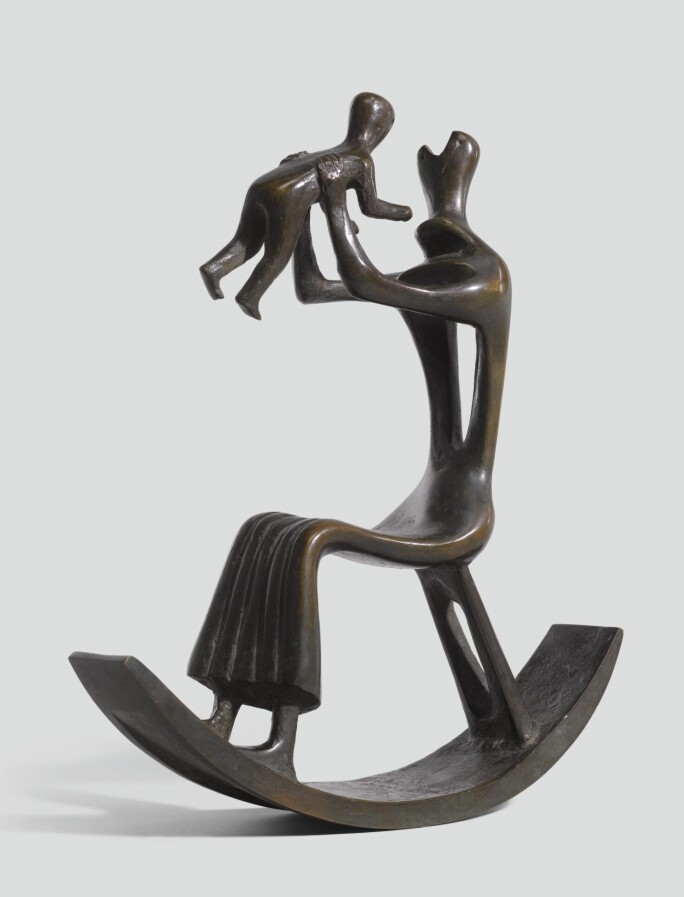 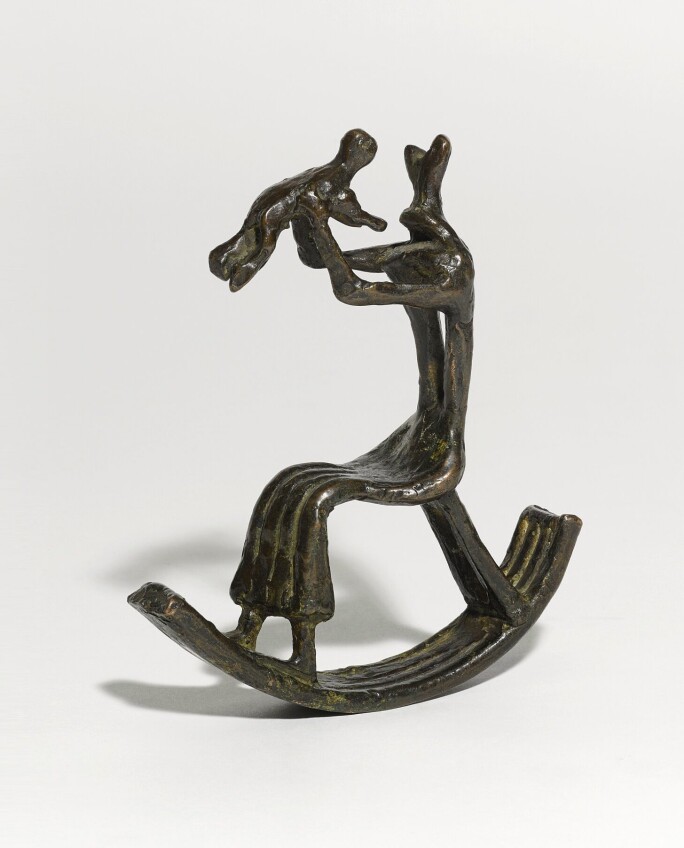 The Rocking Chair bronzes showcase Moore’s continued exploration of the human form, with gentle variations appearing throughout the works. In the present work, the chair in which the mother sits is the most complete of the group, with a back rising behind her. In No. 1 and No. 3 the woman’s body and chair have merged, the latter differentiated by an expanse at the center of the form. The most elegantly figurative of the forms, Rocking Chair No.2 presents a strikingly beautiful silhouette with the rhythmic curves of the figure heightening the sense of motion, and the mother’s gently curled hair recalling that of his wife Irina during this period (see fig. 4). The intimacy of these works offer a fascinating autobiographical insight into the life of one of the most important sculptors of the past century and undoubtedly stand some of the most personal and engaging depictions of the mother and child that the artist created throughout his entire career. Other casts of this form are held in renowned collections including that of the Hirshhorn Museum and Sculpture Garden in Washington D.C.