‘Cedric was a pagan who liked the sun on his back and the day’s colours in his eyes, and the tastes and sights and sounds of Now. On a really beautiful afternoon at Benton End he could be seen lurking amidst the vast blooms he had brought to Suffolk from all over the world, virtually hugging the Now to him, his brown old face tilted a little skywards and his person defyingly, or helplessly elegant in the brown old clothes. A tour through the beds was learned and hilarious by turn.’

Cedric Morris was a modern-day Renaissance man, equally renowned as an inspirational teacher, pioneering botanist, talented painter and convivial host. Though Morris achieved critical and commercial acclaim in London, he disliked establishments, dealers and the strictures of London society. Instead he, alongside his partner Lett Haines, created at their Suffolk home, Benton End, an unorthodox and bohemian artistic hub, where Lucian Freud, amongst many others, began their studies at the East Anglian School of Painting and Drawing.

The gardens that Morris created at Benton End garnered him international fame: he was highly regarded as a plant collector, often gathered on his travels, and plant propagator, particularly of irises. Morris’s deep and thorough knowledge of botany was undoubtedly the bedrock of his paintings, suffused as they were with his profound appreciation for each and every plant. These plants and produce were imbued with personality, taking on anthropomorphic qualities and seemingly having their own interior lives. Traditional still life painting takes on, under Morris’s paintbrush, an unorthodox modernist sensibility, part way between Surrealism and Expressionism.

‘If Morris’s instinct as a landscape painter was to seek out the big pattern and deposit it resplendently on the canvas, it was an attitude that went through his approach to anything in nature, from irises to the bold patterns on birds’ eggs and the bright shapes of generous vegetables. He watched the natural world in much the same spirit that he observed the human comedy. A garden does not need to be thought of as a setting for events. It may be used as a form of theatre: for forty years the garden at Benton End on fine days was full of easels and students, conversations, al fresco lunches and parties. Like a picture it is in the end its own subject.’

The most significant work by Morris to be seen on the market, in its scale and skill, Cabbages lays claim to the legacy of the Old Masters. Morris approached his garden as a canvas and his canvases as re-presentations of his plants, a symbiotic relationship that reaches its apex with Cabbages.

The painting has been held in the Wakefield family collection for nearly 70 years, the embodiment of a family friendship across generations between the Wakefield family and Cedric and Lett. Lady Wakefield’s mother, the artist Rose Marrable, studied at the East Anglian School of Painting and Drawing and Sir Peter and Lady Wakefield were great, life-long friends with the couple and passionate supporters and collectors of Cedric’s work, often bought whilst on leave from Sir Peter’s diplomatic posts with the Foreign Office. Sir Peter was also instrumental in the foundational years of the Jerwood Collection, one of the most important collections of Modern British art, which has amongst its collections another monumental Morris, Blackbird and Flowers, 1952.

In Cabbages, Morris presents an abundance of the fruits of the natural world. The four titular huge cabbages dominate the foreground, the primary protagonists of the painting. The surface on which they sit seems to almost tilt: the cabbages could perhaps roll from the picture plane such is the force of their presence. Cabbage leaves curl and unfurl, Morris delighting in the extravagant scale, texture and colour. Behind three vases hold flowers, their stems crossing and overlapping and the flowers bending and dipping, glorious natural curves and undulations echoing the rolling hills behind. Morris employs local areas of luxurious deep mauve, weaving together the fore and mid-ground with tonal repetition. The landscape behind seems entirely from Morris’s imagination - dense woodland opens up to dome-like green hills. The supremely exact representations of the flowers and cabbages and the fantastical sit alongside one another, Morrisn bringing both the products of both his extraordinary garden and his fertile imagination to bear. 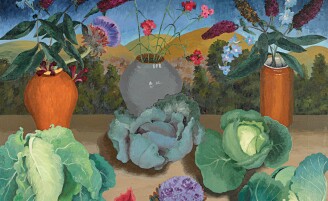