"To call someone a stranger is to keep them at a certain distance, to deny them the possibility of approaching us and to keep us safe from their plight. In doing so we diminish them and we diminish ourselves. We need, as a society, to go in another direction. We need to go towards "them.""

Profoundly poetic and compelling, Glenn Ligon's Stranger #37 represents a fervent monument to the Black American struggle for visibility, recognition, and ultimately freedom. Illustrating text from James Baldwin's seminal 1953 essay Stranger in the Village, Ligon layers white oil stick, rendering recognizable characters that are dichotomously decipherable and concealed; Stranger #37 becomes a visual metaphor for the fragmented experience and representation of both the Black individual and artist in America. Interminably exoticized and presented as foreign within their home territories, Stranger #37 is a physical manifestation of Baldwin's essay on colonialism, national identity and the Black experience, depicted through a medium that expresses the inability to articulate the experience fully. Emphasizing the significance of this series as one of the most celebrated of Ligons career, similar works are held in the collections of the Museum of Modern Art, the Art Institute of Chicago and the Whitney Museum of American Art, among others. Employing radical abstraction and the symbolic poeticism of a monochromatic visual landscape, Stranger #37 is an exquisite example of both Ligon's singular conceptual artistic vocabulary and career-long exploration of questions of race and representation.

Describing the enduring influence of Baldwin's essay, Ligon explained: "He even says, "They don't believe I'm American—black people come from Africa." The essay is not only about race relations but about what it means to be a stranger anywhere. How does one break down the barrier between people? It's a global question, and it probably reflects what I've been trying to do—reach out more." (Glenn Ligon quoted in Glenn Ligon Interview Magazine, June 16, 2009) Written at the dawn of the Civil Rights movement in the United States, James Baldwin's profoundly personal yet expansively political text recounts his experience as a lone black individual visiting a remote Swiss hamlet at the foot of the Alps. He begins: "From all available evidence no black man had ever set foot in this tiny Swiss Village before I came. I was told before arriving that I would probably be a 'sight' for the Village; I took this to mean that people of my complexion were rarely seen in Switzerland, and also that city people are always something of a 'sight' outside of the city. It did not occur to me - possibly because I am an American - that there could be people anywhere who had never seen a Negro." (James Baldwin, "Stranger in the Village," 1953, in James Baldwin, The Price of the Ticket: Collected Nonfiction, 1948-1985, New York, 1984, p. 79) Having been met with stark reactions ranging from curiosity and awe to suspicion and sheer terror, Baldwin's text ruminated on the commonalities between the prejudices expressed in the parochial Swiss microcosm he visited and modern America, where generations of black communities had lived for centuries under violent racial segregation.

A Closer Look with Glenn Ligon

Through claustrophobic channels of formulaic stencilled letters, Ligon adorns the canvas with select passages from Baldwin's text. In a labor-intensive process of continued overwriting, the malleable oil stick collapses to lose its delineating clarity, leaving the words just beyond the boundaries of comprehension. When describing this unique technical innovation, Ligon has referenced Warhol as inspiration: "I wanted the material that I was using for the paintings to have the same kind of gravitas as the text. I was also looking at Warhol's diamond dust paintings and became intrigued by the idea of the addition: material that is laid on top of the paint and changes it…obscures the text while making it more present and sculptural. There is always that push/pull in the work, of the desire for legibility and disappearance of the text." (the artist cited in Exh. Cat., Toronto, The Power Plant (and travelling), Glenn Ligon—Some Changes, 2005, pp. 128-129) By denying these words their full semantic capacities, and by extension the voice of protest that they would otherwise communicate, in Stranger #37 Ligon formally encapsulates the dichotomy of visibility and invisibility that characterizes the intent of the Stranger in the Village. Like Baldwin who found himself fetishized and dehumanized by a community unable to look beyond his skin color, we are stuck interminably trying to capture the elusive and unattainable essence of these mesmeric hieroglyphs through their superficial form rather than their content.

With a rich literary oeuvre that explored the complex social and psychological trauma of not only African Americans but also of gay and bisexual men in their struggle for cultural acceptance, James Baldwin was a profound source of inspiration for Ligon. As his ultimate homage to the writer, the Stranger series forms a profound bridge between two generations. As noted by Scott Rothkopf, "this series constitutes Ligon's most sustained exploration of a single text and formal vocabulary" and evidences a deep identification with the fellow New Yorker who "as Ligon put it, had an 'ability to go places where other black were not and surviving."" (Scott Rothkopf in Exh. Cat., New York, Whitney Museum of American Art (and travelling), Glenn Ligon: AMERICA, 2011, p. 42) Baldwin sought to highlight and destabilize the degrading myths attached to black identity in his generation. Similarly, Ligon and the group of artists that first galvanized around the Studio Museum in Harlem in the early 1990s sought to subvert stereotypes and notions of black identity, criticizing racial prejudice and inaugurating the 'Post-black Art' discourse.

Whilst the Swiss villagers only held notions of black identity in their abstract imagination until Baldwin's arrival, he concluded that black identity in America had itself been projected into the realm of fictitious myth as means of maintaining racial segregation. Divinely conjuring this astute observation almost half a century on, Stranger #37 is the ultimate embodiment of Baldwin's maxim that "Americans attempt until today to make an abstraction of the Negro." (James Baldwin, Op. Cit., p. 87) Ligon represents the Black struggle for representation through the layered white canvas and illegible segments of words, projecting a chilling reflection of the prejudice of white America. Firmly inserting African American voices into the canon of American painting, Ligon evokes the monochromatic reductionism of modernism, while retaining a particularly painterly modulation of text which supplants the graphic clarity of forerunners such as Ed Ruscha and Christopher Wool. As noted by Huey Copeland, "Ligon's [Stranger series] summons up death, matter, and the obliterate beyond; it seduces with a certain sleight of hand; it narrativizes perception. Yet, in so doing, the work revises these earlier practices with the overlaying scrim of a blackness that is not merely rhetorical, but lived and felt." (Huey Copeland in Exh. Cat., Toronto, Op. Cit., pp. 128-129) 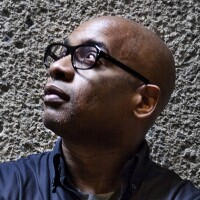 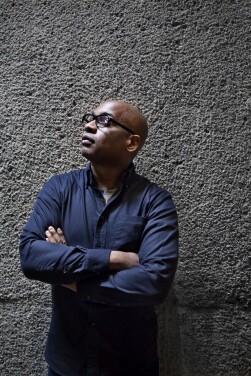