“Like cloverleaf intersections contracted within the frame of a pictorial kaleidoscope…”

P ainted in polymer and fluorescent paint, Frank Stella's Flin Flon XII from 1970 is an impressive example of the eponymous series, named after the Canadian town of Flin Flon in Manitoba. These works were produced while Stella was teaching at the Emma Lake workshop at the University of Saskatchewan, Regina. Although he was currently working on shaped canvases, he had no access to these specially produced supports while in Saskatchewan. Instead, he modified the protractor format to fit onto a square canvas. The composition is broadly divided into four semi-circular arcs which form a geometric flower motif.

With Flin Flon XII, Stella departs from the strict rectilinear compositions of his famous 1959 Black Paintings and explores the lyrical possibilities of circular form and luminous color while retaining the control and austerity of his earlier work. The vaulting arcs and related bands are based on the semi-circular outline of a protractor. They are interlaced in such a way that the distinction between foreground and background begins to break down; creating a perplexing variety of colored formations that seem to continually evolve before the viewer's eyes. Art historian Robert Rosenblum described this group of works: “Like cloverleaf intersections contracted within the frame of a pictorial kaleidoscope, these restless arcs strain their boundaries, exchanging positions in-depth, brusquely switching roles of visual priority, pressing inward and outward, forward and backward for completion of their fragmentary shapes and abruptly interrupted energies.”

Stella drew on several different sources to create these works. He was heavily influenced at the time by his study of Islamic art, having traveled to the near east in 1963. In his closely related Protractor series of paintings, he titled a number of the works after ancient circular city plans in Asia Minor. Furthermore, as several historians and critics have noted, there is a close relationship between Stella's work of this period and Islamic ornament. Other sources for Flin Flon XII can be traced to the artist's interest in Hiberno-Saxon illumination. In an early essay written while at Princeton, Stella compared Jackson Pollock's looping drip patterns to the interweaving motifs in these illustrated manuscripts from the 7th and 8th centuries, and Rosenblum has explicitly compared this period of Stella's work to what he called the “expansive and open proliferations” of the illuminated manuscript Book of Kells. 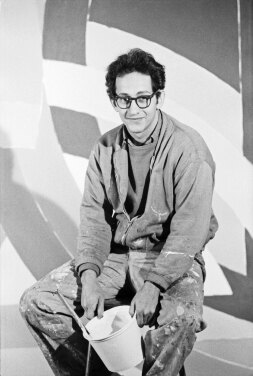