In its scale and innovative formal arrangement, Femme assise dans un fauteuil is a striking example of Picasso’s wartime portraiture. Painted on 3rd November 1941, the subject of this work is Picasso’s muse and lover, Dora Maar (fig. 1). Picasso first met Maar in early 1936 and over the following months was seduced by her vivid looks, quick intelligence and sense of independence. Maar brought a fierce intensity to their relationship and Picasso’s paintings of her mark a vast contrast, both visually and conceptually, to the soft sensuality of his 1930s portrayals of Marie-Thérèse Walter. Where portraits of Marie-Thérèse were characterised by curvaceous forms and a somnolent sense of tranquillity, Picasso’s depictions of Maar are driven by a darker force.

Femme assise dans un fauteuil belongs to a particularly powerful group of portraits from the late 1930s and early 1940s in which Picasso returned to one of his favoured compositional devices (fig. 2). In these works Maar is shown seated, larger-than-life, often staring directly out at the viewer; she is beautiful, but it is a hard and austere beauty. Discussing this period of the artist’s work, Stephen A. Nash observed: ‘The one theme from these years that outweighs in importance and repetition even Picasso’s still lifes is that of a Seated Woman. This motif defines more than any other the intensity of work from the war years. Beginning, as we have seen, in the Royan period and continuing throughout his time in occupied Paris, Picasso returned to the compositional idea of the Seated Woman again and again, wringing from it varied expressive effects and psychological nuances. For Picasso the theme developed into a kind of looking glass that reflected his own internal reactions to people and events around him, whether it be happiness with a lover or anguish and fear about the war. From his ‘portraits’ of others, an extensive self-portrait of the artist emerged’ (Stephen A. Nash, in Picasso and the War Years (exhibition catalogue), California Palace of the Legion of Honor, San Francisco & The Solomon R. Guggenheim Museum, New York, 1998-99, pp. 32-33).

This ‘self-portrait' through painting is a recurring and important element of Picasso’s work. His art – whatever the subject – communicated his lived experience of the world around him. In the work of the early 1940s, the war is a quiet and steady presence. After the explosive pain and violence of Guernica in 1937 Picasso largely avoided explicit reference to the desolation of war; instead he approached the subject indirectly, painting still-lifes (fig. 3) and portraits. These pictures capture the reduced circumstances of a life lived under occupation with food shortages, regular Gestapo visits and increasingly desperate news from the frontline. They chart moments of both pessimism and optimism, revealing at once the deprivations of war and the spirit of resistance that prevailed underneath. As Picasso later observed: ‘I have not painted the war because I am not the kind of painter who goes out like a photographer for something to depict. But I have no doubt that the war is in these paintings I have done. Later on perhaps the historians will find them and show that my style has changed under the war’s influence. Myself, I do not know’ (Picasso, quoted in ibid., p. 13). 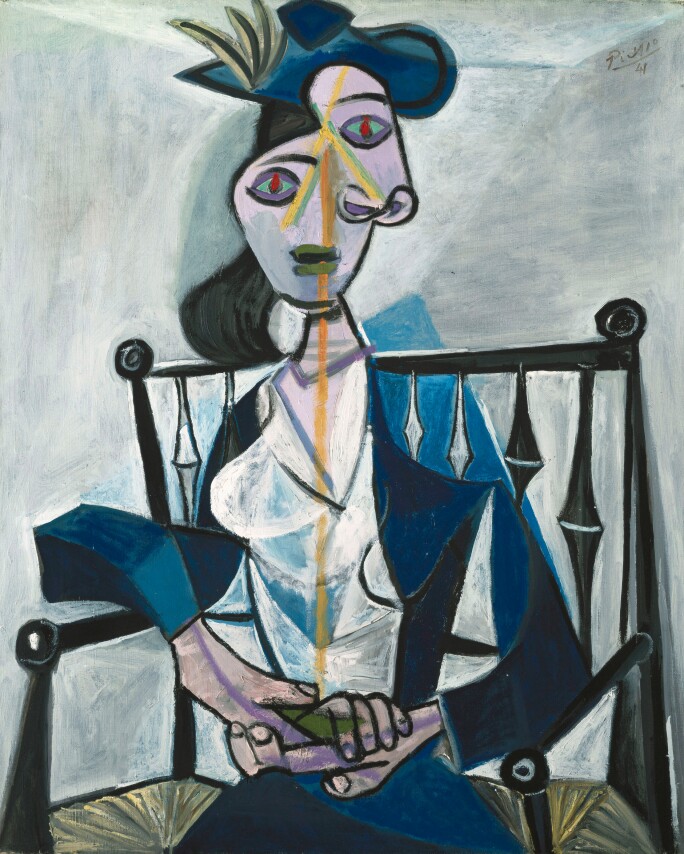 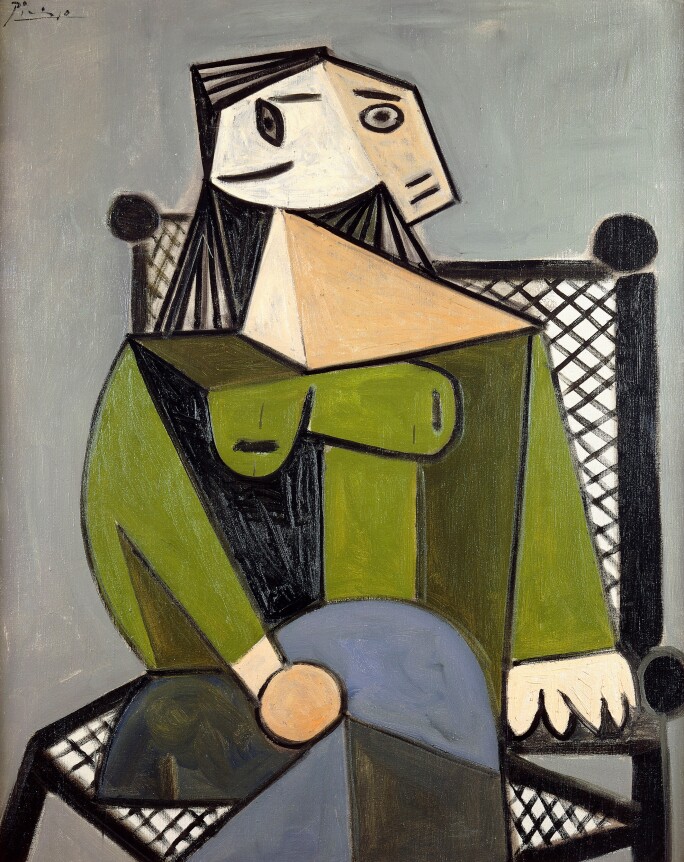 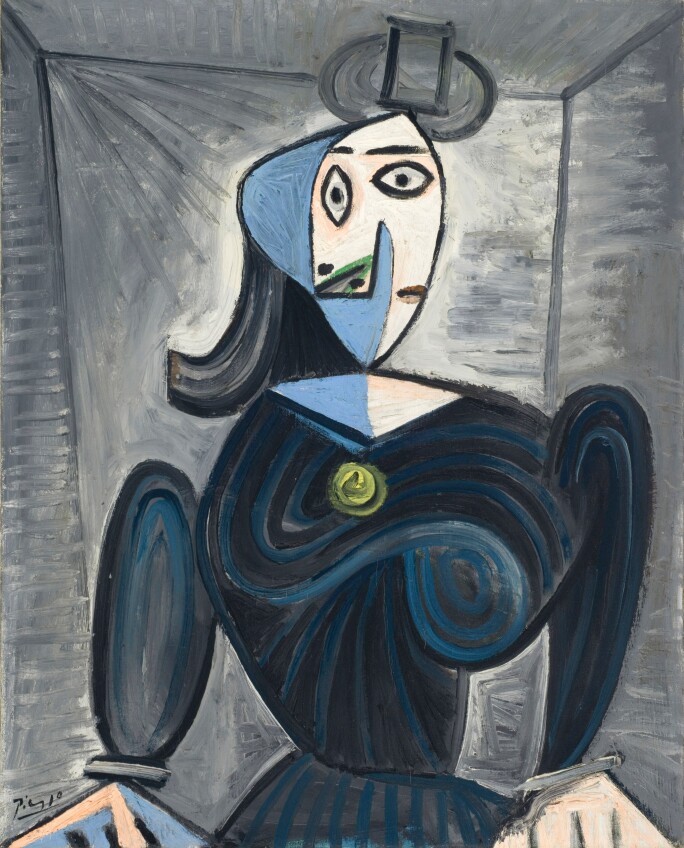 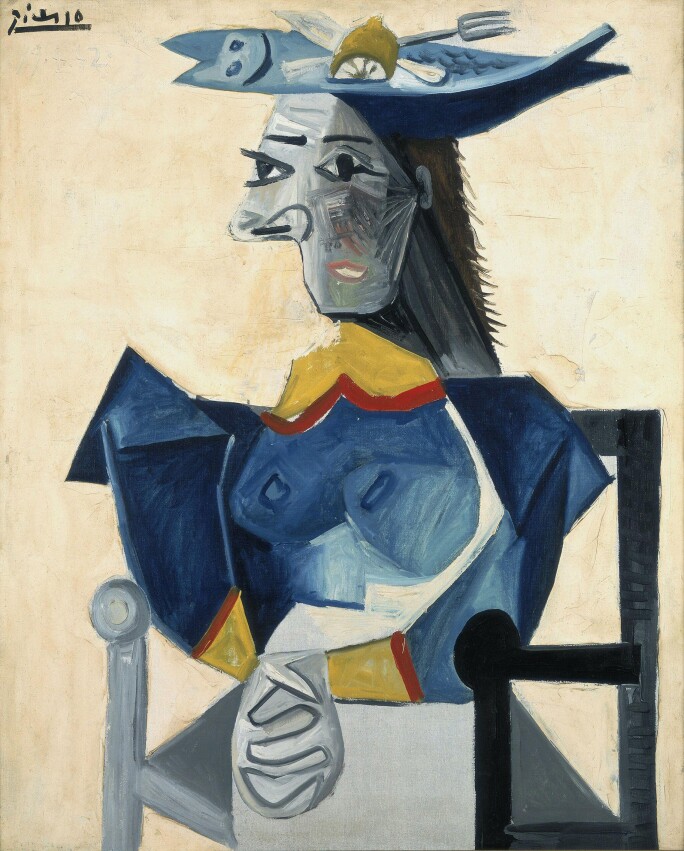 Femme assise dans au fauteuil captures the mood of this period perfectly. The restrained palette of greens, blues, greys and brown evokes a certain austerity whilst the emphatic black lines and bold simplification of the forms create an energy that demands attention. Like many of his best portraits of Maar from this date, the work reveals a new psychological depth that reflects Picasso’s own thoughtfulness; ‘it has been observed that Picasso never works directly from the model. His portraits are of persons remembered. They portray, through the instinct and vision, through the delicately balanced co-ordination of eye, mind, hand, and heart, a new realism reaching into the deepest recesses of man’s inner nature […]. Characterised by the extreme eccentricity and psychopathic distortions of their personalities, the likenesses are visibly stamped with their traumatic scars’ (Harriet & Sidney Janis, Picasso, The Recent Years, 1939-1946, New York, 1946, n.p.).

There are elements of the figure that are unmistakeably Maar, from the hat that crowns her on her throne to the sharply angled detailing of her fingers. This latter almost definitely recalls the legendary story of one of their first encounters, when Picasso came across Dora Maar seated at a table in Les Deux Magots driving a small knife into the wooden table between the fingers of her gloved hands, sometimes drawing blood. Entranced by this dangerous game, Picasso introduced himself and at the end of the evening took the gloves as a memento. At the same time, her features are abstracted beyond simple recognition, with the angularity of her hands repeated in the shapes and intersections that define her figure. Recalling Picasso’s Cubist innovations, these stark lines deconstruct the body, emphasising certain elements and creating a vigorous energy within the composition. In these portraits we find Picasso searching for a truth that is beyond the purely physical. As Brigitte Léal writes, ‘Their terribilità no doubt explains why the innumerable, very different portraits that Picasso did of [Dora] remain among the finest achievements of his art, at a time when he was engaged in a sort of third path, verging on Surrealist representation while rejecting strict representation and, naturally, abstraction. Today, more than ever, the fascination that the image of this admirable, but suffering and alienated, face exerts on us incontestably ensues from its coinciding with our modern consciousness of the body in its threefold dimension of precariousness, ambiguity, and monstrosity. There is no doubt that by signing these portraits, Picasso tolled the final bell for the reign of ideal beauty and opened the way of for the aesthetic tyranny of a sort of terrible and tragic beauty’ (quoted in Mary-Margaret Goggin, Picasso and his Art during the German Occupation: 1940-1944, Ph.D. dissertation, Stanford University, 1985, p. 385).