“It’s always been a matter of impact, the relationship of color to color and word to shape and word to complete the piece – both the literal and visual aspects. I’m most concerned with the force of its impact.”

Robert Indiana’s Love is an iconic statement in three dimensions. The famed compositional arrangement of the letters L.O.V.E. was conceived by Indiana for a Christmas card commissioned by the Museum of Modern Art, New York, in 1965, five years after the museum had for the first time acquired a work of his. The hard-edge surface and the chromatic decisions pay tribute to the formulaic principles of Indiana’s mentor and lover of some time, Ellsworth Kelly, while the masterful separation of the semantic from the graphic aligns Indiana with giants of Pop art, especially Ed Ruscha. With LOVE and all its variants, Indiana captured the Zeitgeist of the countercultural movement which culminated in the Summer of Love of 1967 and distilled the aspirations translating them into a powerful artistic expression that is today as relevant as fifty years ago.

“I had no idea LOVE would catch on the way it did. Oddly enough, I wasn't thinking at all about anticipating the Love generation and hippies. It was a spiritual concept. It isn't a sculpture of love any longer. It's become the very theme of love itself.”

Growing up moving from town to town until the age of seventeen, Indiana spent much time on the road, with nothing more permanent than the family car to call home. The road signs by the motorways were constant companions to the boy on his travels and left a lasting impression. Towering above the highway, they provided direction to the pseudo-nomadic family, instilling in their migrations a sense of purpose and guiding them along their journey through life. Attributing the proliferation of signs to the peculiar cultural environment of the United States, Indiana remarked: “In Europe trees grow everywhere; in America, signs grow like trees; signs are more common than trees” (Robert Indiana cited in: Joachim Pissarro, 'Signs into art', in: Simon Salama-Caro et al., Robert Indiana, New York 2006, p. 59).

The expressive red and the light blue are used not just for their symbolic association with love and hope but, in an autobiographical note from Indiana, assimilate the color scheme of the logo of the Phillips 66 gasoline company where his father worked during the Great Depression. Thus, irrespective of the seemingly simple, pristine directness of Love, the works of the series are thus deeply anchored in the life of the artist. With regards to the genesis of what Indiana calls a ‘one-word poem’, he illuminates: “The reason I became so involved in Love is that it is so much a part of the peculiar American environment, particularly in my own background, which was Christian Science. God is Love is spelled out in every church.” (Robert Indiana cited in: Exh. Cat., Nice, Musée d'Art Moderne et d'Art Contemporain, Robert Indiana, 1998, p. 27). Love brings to fruition the architectural weight of the compositional form through its bold typographical design. The stacked letters with the signature slanted O commit to a square format in this iconic sculpture. The linguistic simplicity and striking geometry have become part of our cultural lexicon for one of the most complex core emotions of humanity. 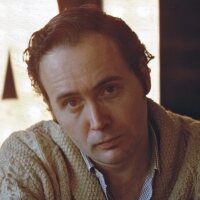 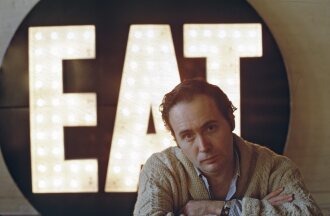