D.A., born Dominic Tinio on January 20, 1972, in Newark, New Jersey is a first-generation Filipino American artist and Founder of Burning Man Project's Playa Restoration All-Star Team, which he has managed since 2005. He first made his way to Black Rock City, the home of the Burning Man event, in 1997 wearing his signature black wings and quickly became known as the Dark Angel of Black Rock, today simply known as D.A.

In 2006, D.A.'s poster art for Burning Man event theme “Hope & Fear” was handpicked by founder Larry Harvey as the official theme announcement. This was the beginning of many theme art collaborations between the two over the years until Harvey's passing in 2018. In addition, D.A. has designed the visual identity for many other Burning Man teams including Playa Restoration, Census, and Volunteerism to name a few. He was also the cover designer for Burning Man Publishing’s debut title: Tony "Coyote" Perez's Built To Burn: Tales of the Desert Carnies of Burning Man. In Black Rock City, D.A. is the creator of the Fireside Circles— concrete fire rings and circular benches out in the open playa for the community to gather around a warm and cozy fire.

As Manager of Burning Man's Playa Restoration All-Star Team, aka “Resto'' D.A. is on the council of Black Rock City’s Department of Public Works and is responsible for the event's Leave No Trace (LNT) effort in the Black Rock-High Rock Emigrant Trails National Conservation Area in Northern Nevada.

In 2006, D.A. using his design background, created the MOOP Map community feedback tool to visually display Resto’s progress and degree of difficulty cleaning up through Black Rock City. The MOOP Map has since become an invaluable part of Burning Man’s Leave No Trace success and thanks to the entire BRC community supported by Playa Restoration, Burning Man has an undefeated LNT record, passing every Bureau of Land Management’s Environmental Inspection since its inception. This is no small feat and in 2019, D.A. led Burning Man to a near-perfect score of under .002 % MOOP debris in a total area of 3,603 acres.

“After my first burn in 1997, I knew I wanted to move out west to San Francisco and join the emerging burner community. I was going to do all the things and be this mad, impetuous artist— spin fire, weld metal, play in a band, build art sculptures and theme camps and Black Rock City. At the time, I had no idea that my true artistic calling would be in the art of Leaving No Trace. Cleaning and restoring the Black Rock Desert and making it look like Burning Man never happened. A flash mob of 80,000 people building a city in the desert for a week, setting it aflame, and then POOF! Vanished without a trace. The great disappearing trick!” – D.A. of Black Rock

In 2020, during the COVID19 pandemic, as an awareness and fundraising event for Burning Man's 2030 Environmental Roadmap, D.A. completed the first “MOOPATHON” by walking the 88 miles of desert highway from Wadsworth to the Black Rock Desert all the while picking up MOOP the entire way. Over 8 days, he picked up 2000 lbs of litter and debris and raised over $31,000 in donations – all of which will go towards powering the Burning Man Pavilion (the site of the Burning Man effigy) with solar power in 2022 and beyond.

“I know it sounds crazy to walk almost a hundred miles to the Black Rock Desert in July while picking up litter the entire way. But after achieving a near-perfect score on the BLM’s Post Event Inspection in 2019, I felt that the only way to top that was to make a statement– to grow beyond our success of Leaving No Trace and strive towards Burning Man’s future of environmental sustainability and regeneration. That’s why I wanted the funds I raised from the MOOPATHON to go entirely toward powering the Burning Man itself with solar power as a symbol of our commitment toward sustainability forevermore. In this way, our founding principle of Leave No Trace was just the beginning.” – D.A. of Black Rock

"I know it’s crazy to walk a hundred miles to the Black Rock Desert in deadly hot July while picking up litter the entire way. But after a critical victory and near-perfect score on the 2019 BLM Post Event Inspection, I felt that the best way to top that was to physically make a statement– to grow beyond our success of Leaving No Trace and strive towards Burning Man’s future of environmental sustainability."

"Swan Song (Leaving No Trace Was Just The Beginning)" is a self-portrait by the D.A. of Black Rock, commemorating the 25th anniversary of his first burn. Here, the artist steps towards the unknown future as he reflects on his life's work, community, and legacy – from newbie volunteer participant to artist to Burning Man's Environment Restoration Manager responsible for "Leaving No Trace" on the Black Rock Desert.

Like a sword, he carries on his shoulder his "MOOP Stick," aka pick-up tool, and is wearing the Playa Restoration shirt he designed upon founding the team. Wearing his late father’s watch, a reminder that the time is now, D.A., with a wave of his hand and the power of his mind, raises the last bit of MOOP (Matter Out of Place) from the playa surface, leaving no trace before walking off into the sunset. With the MOOP depicted floating in the air, the artist is showing us an edifying sample of the types of MOOP that sometimes lay hidden beneath the surface. The ravens, who are Resto’s mascot and can often be found picking up MOOP on the playa, precede D.A. as they fly toward the sun.

The title “Swan Song (Leaving No Trace Was Just The Beginning)” contemplates mortality and signals the closing and opening of a new life chapter, leaving no trace but a legacy with the next generation of Burners that D.A. hopes will live long after he too is gone without a trace.
This is D.A.'s first NFT and self-portrait artwork.

Other Works by D.A. of Black Rock 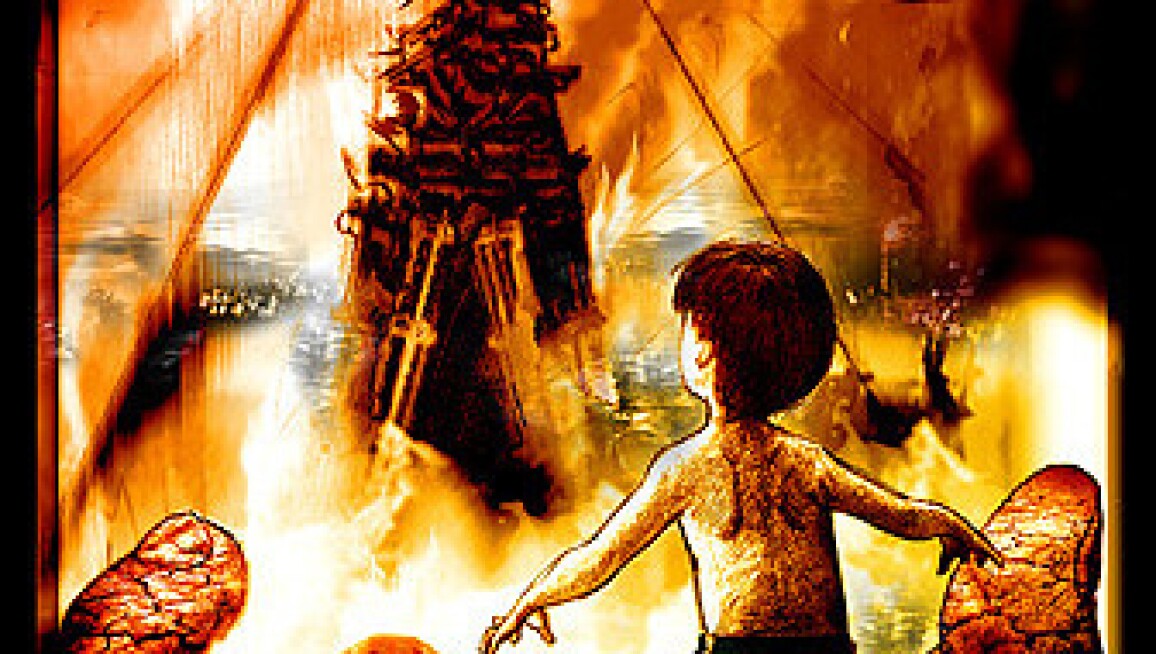 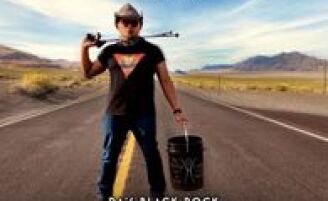 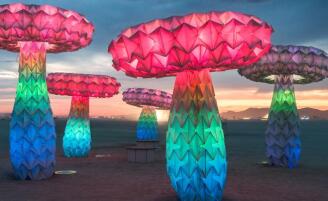 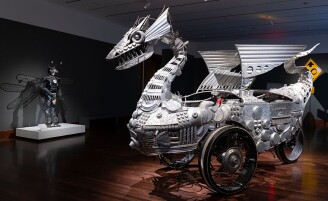 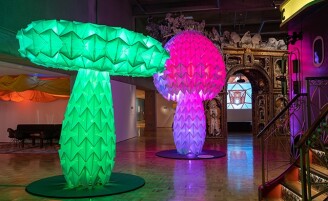 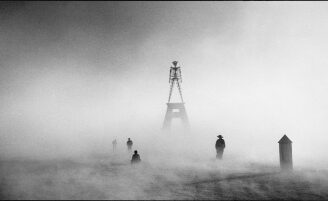